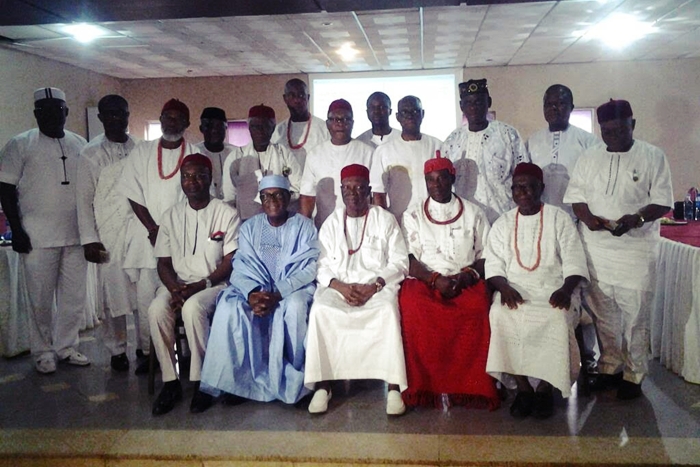 Members of Club ANIO-50, a pressure group in Delta State have added their voices to the need for the President Muhammadu Buhari-led federal government to urgently address the growing call to restructure the country.

The group, predominantly made up of the Aniomas, also urge the FG and the state governor, Mr Ifeanyi Okowa, to address the insecurity that has bedeviled the state over the invasion of nomadic herdsmen, ravaging farmlands with particular reference to the Anioma people.

Club ANIO-50 which was founded in 1987 emerged against a background of alienation, marginalization and contemptuous exclusion of the Anioma people from the affairs of the defunct Bendel State.

The founding members of the Club made sure that only persons who were driven by patriotic zeal, knowledge and understanding, to devote energy, time and resources in pursuit of commodious life for Anioma people were admitted in the Club. That the Club is able to attract such calibre of persons into its ranks, is evident in the kind of struggles that it has engaged its energies over the years.

In June 2017, the group in her monthly meeting deliberated on insecurity in the Anioma Area resulting from incessant attacks on farmlands by Fulani herdsmen where the state of the Nigerian nation was discussed.

The clamour by various groups, the quit notice served the Igbos living in the northern parts of Nigeria and the wide call for restructuring of the country to address the real and perceived marginalization that is currently threatening the unity of the country where among issues deliberated on.

Arising from a colloquium held at the weekend at Nelrose hotel Asaba, with participants drawn from the traditional institutions, government functionaries, civil servants, the media, academia, Club ANIO-50 members’ discussions were focused on the security of communities and farmlands in view of the incessant attacks by so called Giuliani guardsmen and how to strategically position Anioma in a restructured Nigeria.

In a communiqué issued at the end of the colloquium, the group resolved that “Anioma believed in one Nigeria”.

It was however agreed that the clamour for restructuring stems from the fact that there is so much inequity, inequality and injustice in the existing structure of today’s Nigeria.

“There is need to review or possibly rewrite the existing constitution to reflect true Federalism. Devolution of powers to the states so that states can manage their resources and government was considered absolutely essential”.

It called on the federal government to limit its activities to territorial defense, national security, customs and immigration.

According to the communiqué “a federal army to be called in as may be required by the state, state police to be established for internal security who in addition to fighting crime should checkmate the untoward and dangerous activities of the “Fulani Herdsmen” in their attacks on traditional farmers of Anioma people”.

It was also resolved that the state should enact laws that prohibit open grazing, that ensures that cattle rearers lease or purchase land from the native to set up ranches for their cattle.

“Traditional rulers and youth leaders should meet regularly to discuss security issues in their areas. All the units that make up the Anioma Nation should come together possibly under one umbrella organization as it is one key way to speak with one voice and move forward together as a people”.

For Anioma to be self-sufficient in a restructured Nigeria, the communiqué agreed that the Anioma area is endowed with high level manpower which can set up a “Silicon Valley” to propel industrial growth.

“The area is a mini Nigeria and has all the agricultural landscape available in the entire nation to make it an agro-based economy. To support this, the Delta State University, Anwai campus should be converted to a full-fledged University of Agriculture to provide knowledge as well as skills and guide extension workers on farms.

“That government is advised to set up farm settlements in each local government area. That the road network in Anioma be well developed to enhance transportation of farm produce. That the River Niger shoreline which stretches for hundreds of kilometers through the area be developed and exploited for its very rich tourism potential”.

“That claims of availability of other minerals like lignite, kaolin, gas (in commercial quantity) be investigated to potentially diversify the economy. That all effort be made to enable the airport attain its potential of serving even the neighbouring States. That Asaba capital territory be developed to checkmate perennial flooding and attract investors and tourists to boost the economy”.

The colloquium supports the indivisibility of Nigeria just as it was agreed that restructuring Nigeria is paramount due to the prevailing inequity, inequality and injustice that is currently plaguing the nation.

On the issue of insecurity of our farmlands due to the invasion of Fulani Herdsmen, the colloquium concluded that “Fulani cattle rearers should ranch their cattle to avoid the currently experienced attacks on various communities in Anioma”.

“That states be free to develop at their own pace within their Geopolitical zones as presently constituted. Each state to contribute a percentage of its earnings and revenue to the central government, Delta State government should through proper governance, position Anioma to ensure it is a viable, self-sufficient entity in a restructured Nigeria”, it concluded.