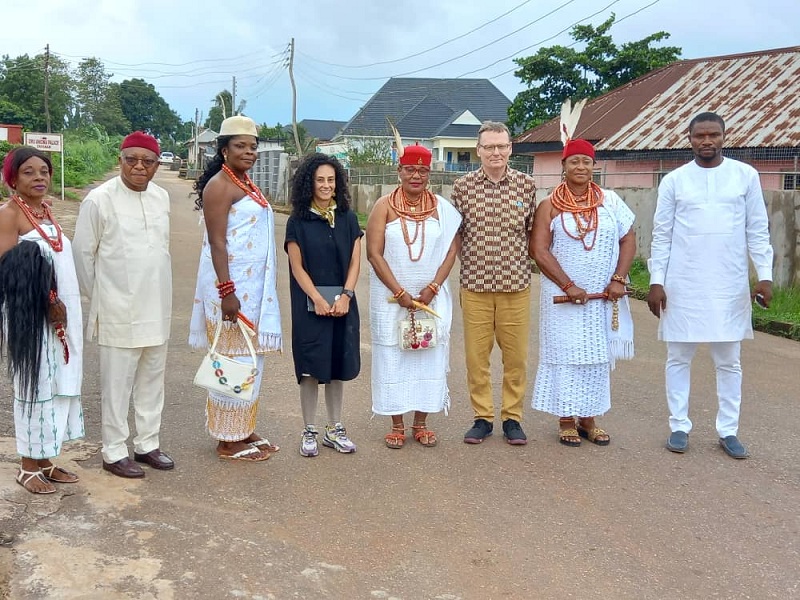 The Professors acknowledged that Obi Martha Dunkwu had promoted the ancient Institution of the Omu and had done so much in the advancement of the voice of women and leadership in Africa and beyond.

On this note, they submitted that they had visited all the way from USA to come learn some lessons from the Queen Mother for academic exercise, which they affirmed would help to better humanity.

According to Prof. James Robinson who had earlier visited privately and decided to do a return visit with his team, “We believe we have so much to learn from you, being a typical example of pure knowledge.

“We are thrilled by your transformation into the ancient women’s leadership Institution, thereby bringing out the best from the system in a way that adds monumental value to humanity.

“Your Mentorship is awesome. You are read far beyond your imagination in terms of territory. We were enthused by your cerebral understanding of almost every aspect of life when we studied articles written about you and things that you said.

“The Omu Institution from things we have learnt and heard you said, made interest to us. For this reason, we are here to know the origin of this Institution,  your challenges in dispensing leadership especially in an environment where men are also in charge and of course how you view women’s leadership in the African system.

“We will be pleased to also know how you handle matters and resolve crisis. Do you defer to other local authorities and how are your activities and functions funded? We are here to learn Your Majesty”, Professor Robinson stated.

Excited by the enthusiasm of the Professors, Obi Martha Dunkwu beamed a warm smile before responding.

She started by giving them historical background and meaning of Omu which she dated back to have existed for over 700 years ago according to Prof. E.A.C Nwanze’s research.

She recalled that when she came into the institution and met only five Omus existing at the time (22 years ago), she felt the institution was going to go into extinction if nothing urgent was done. And that was how she met with the former Vice Chancellor of the University of Benin,  Prof. E.A.C. Nwanze to do a research on the institution to enable her evaluate the situation of the Omu throne and initiate ideas that would engender renaissance into the ancient Institution.

“I am an incurable optimist and change agent who believes that the only person that can stop me from doing what I desire to do is God. He chose me to occupy this seat through our ancestors. I didn’t contest the seat, it was never my wish to be here, but God who plans the affairs of man before his existence planned it all and made it possible. My assignment as Omu is a physical manifestation of a spiritual conclusion. And so, I represent the forces of light which will in perpetuity defeat the forces of darkness.

“My activities as a Media Practitioner and Image person also helped me to achieve the much I have done in propagating this Institution and our culture as Anioma people.

“So far we have about 15 Omus and more are being crowned. The other five I met when I was crowned have all passed on except one. If I had not taken the challenge to promote the institution, may be by now we wouldn’t be talking about the institution.

“Our forefathers after creating the institution, gave the market to the Omu as a custodian, to enable her raise money for her upkeep and carrying out of the spiritual functions of Omu. But today, the Local Governments are in the markets collecting revenues. After coronation,  an Omu is abandoned by her community; no money to feed, buy drugs when sick, not to talk of actively carrying out her spiritual assignments for the community. And don’t forget that she cannot marry, she cannot have a lover, she cannot attend burial functions, when she attends events she cannot eat out. Many do not have houses to live in, it is either you live in your father’s house or uncle’s house. In some communities where they manage to build a small hut or Palace for the Omu, the structure goes back to the community when the Omu passes on.

“Those were the challenges and they are still very much challenging today. And as a young and educated Omu, I felt these should not be even though I was lucky to have been in business before the call. The Palace you see is my personal effort and I have used my personal resources all these years to promote the institution. I was crowned Omu Anioma to help promote our cultural identity, language, food, native dress (Akwa Ocha) and others. It’s very expensive but God has been helping me. Today,  all over the world,  people want to come to learn about the Omu Institution because of our efforts and commitments. Thanks to my media partners, Comrade Patrick Ochei and others, and of course our Anioma historian, Mr. Emeka Esogbue and our supportive Anioma Traditional Rulers.

“Again, having analysed this situation the Omus were faced with, I went to Federal Government to agitate that Omus should be paid. I was told it wasn’t possible being an institution only practiced in Delta State. I came back to Delta State during the administration of our ingenious Governor James Ibori to also agitate. Again,  I was told that it wasn’t possible being an institution only practiced in Delta North Senatorial District (Anioma). The Governor in his ingenuity, said the only way forward was for the Local Governments in Delta North to pay the Omus because it is their people that have this institution and the Councils are collecting revenues from the markets meant for the Omus to control. The same wonderful Governor Ibori, because of his love for the institution,  issued a fiat that the Omus should be recognised as Royal Mothers to give credence to the great work they are doing in various communities. However, as we speak today, no Omu has been paid a dime by our Councils Chairmen”, Omu affirmed.

Speaking further on the concept of women’s leadership in African system, Omu Dunkwu insisted that Africans respect their women more and protect their rights. She said that Africans had long realised that man is first and woman is second according to creation and had always respected that injunction in addition to supporting women to fulfill their purpose on earth.

“We had always been women friendly and had never done things to relegate women. However,  it was the Europeans that truncated that perfect order that guaranteed the right of women without their protesting for it.

“For example in Anioma,  our forefathers created the institution of Omu with a decree that she must be in charge of women in the community, must be the custodian of the market, must be the spiritual guide to the community and traditional ruler among other functions. They also made it impossible for the Omu to be removed, while equally placing impossible conditions for her to abdicate.

“Generally in Anioma too, when a man marries more than one wife, he builds each a house, shares his farm produce for each of them and ensures that the home is at peace at all times, barring unhealthy frictions and acrimony between the wives and their children. We have a well structured polygamy, unlike the western world that preaches one man one wife, yet engages in serial polygamy where an immediate family does not know the man has children outside until when he passes on and his Will is being read.

“So, for over 700 years that Anioma forebears created the Omu Institution, only the men had managed it till date. The men get messages on who becomes an Omu and dictate when she is crowned, how she lives and how she is buried in case she passes on. In all of these, the dignity of the Mother (Omu) is not negotiable irrespective of how the men sometimes deviate from the focus line. It is therefore undisputable that our forefathers were women friendly over seven centuries ago, whereas the western world only started women inclusion about a century ago. Yet they come to tell Africans about feminism, 35 percent affirmative action, gender equality and all that, just to subsume our belief system into their sectional agenda.

“The Omu is a crisis manager, she settles disputes not just between women and women but among men and strangers too. When issues become too difficult for men to handle, they invite a mother to resolve them. I did that close to two decades ago when the villages in Okpanam were fighting and killing each other over land and boundary disputes. As a mother who thinks and reasons holistically without an attached interest,  disputes are better managed and resolved by an Omu than with men who are driven by interests in a matter.

“The world order is in shambles and we must make sacrifices to salvage the world and make the society better. The future of the world is in the hands of women. Not because they are in competition with the men folks but as complementary elements to them.

“For the past 22 years, I had devoted my time, energy and resources serving our community. Some appreciate it, some don’t and instead see me as a competition. Of course I am not; I don’t overshadow anybody,  I am only doing what the spirit directs me to do.

“However, of recent I started thinking. We must make positive impacts in the lives of our young ones, especially the girl children which I have always been passionate about. As a result of that deep thinking, I came up with the idea to register the Obi Martha Dunkwu Foundation to give scholarship to indigent Anioma girl children. I also thought of the Omu Institution, what happens when I pass on. That dream also birthed the Centre for Omuship in Anioma. Eventually,  we had registered the ‘Obi Martha Dunkwu Foundation’ and the ‘Omuship Installation In Anioma and Women Development Initiative’ is in the process of being registered with the CAC.

“My dear Professors, we must make sacrifices and we must add value to better humanity. Individuals must change for society to change for the better. Imagine it, if every individual changes his ways and collectively we all changed, then of a necessity must we have a changed society”, Omu Dunkwu concluded.

It was an interesting meeting and the research Professors were indeed elated that their journey down from the USA to Okpanam was worthwhile.

Meanwhile, Prof. James Robinson presented a copy of his book – “Why Nations Fail: The Narrow Corridor – States, Societies, and the Fate of Liberty” to Omu Dunkwu, after which the research team was taken on a guided tour of the Omu Anioma Palace to view the innovations already put in place for the take off of the two Foundations any time soon.

Again, the Professors were thrilled by the fusing of the ancient and modern architectural designs to achieve the masterpiece seen as Omu Anioma Palace, which is adorned with strategically positioned signposts – “Image Is Everything”. They however,  individually pledged to support the Foundation initiatives when it is billed to take off.