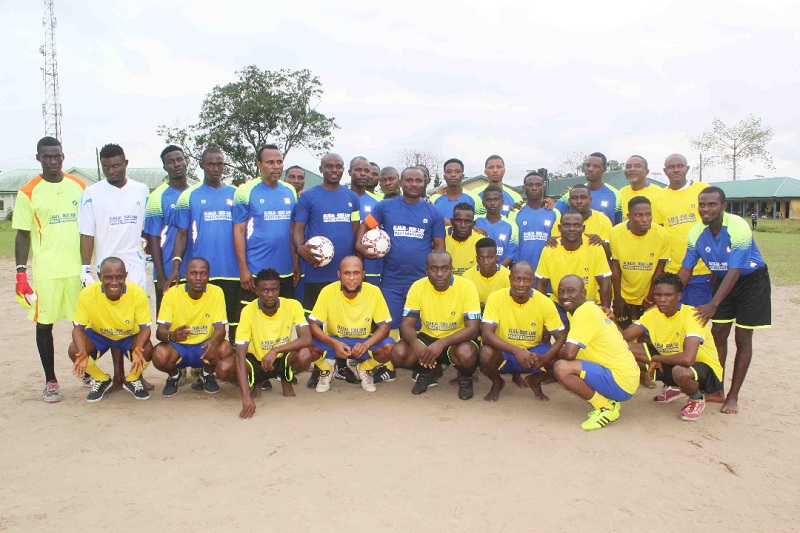 Dignitaries in Udu and Warri South-West Local Government Areas of Delta State and beyond turned up in their large numbers to watch the Aladja/Ogbe-Ijoh Peace novelty matches at Ogbe-Ijoh and Aladja towns on Saturday 12th and Sunday 13th Sept, 2020 respectively.

The novelty peace football matches were organized by the Aladja-Ogbe-Ijoh Peace Vanguard in collaboration with Center for Peace and Environmental Justice, CEPEJ as one of its strategies to deepen the ongoing peace process in Aladja and Ogbe-Ijoh communities.

At the Ogbe-Ijoh township playground, the Pere of Ogbe-Ijoh Warri Kingdom appreciated all the peace ambassadors for their individual and collective efforts towards restoring permanent peace to the hitherto troubled area, and released his royal blessings on indigenes of both communities. He advised everyone to key into the peace initiative and allow peace to reign.

The Ogbe-Ijoh Warri Monarch urged the Delta State Government led by Governor Ifeanyi Okowa to bring the desired development to Aladja and Ogbe-Ijoh to boost peaceful coexistence among indigenes of the two communities.

In the same vein, HRM, the Ovie of Udu Kingdom ably represented by High Chief C.C Whiliki, thanked and appreciated the CEPEJ and Aladja/Ogbe-Ijoh Peace Vanguard for bringing this great joy and peace of unity to us and called on leaders to join hands in sustaining the hard earned peace.

For his part, the National Coordinator of Center for Peace and Environmental Justice, CEPEJ, Comrade (Chief) Mulade Sheriff, the Ibe-Sorimowei of Gbaramatu kingdom, and one of the major supporters of the peace process asserted that peace is an inevitable factor for development.

He presented certificates of peace award to the two Royal Fathers of Ogbe-Ijoh Warri and Udu Kingdoms, the Chairmen of Udu and Warri South West Local Government Areas, amongst others for their immense contributions to the peace process, and urged others to emulate their examples.