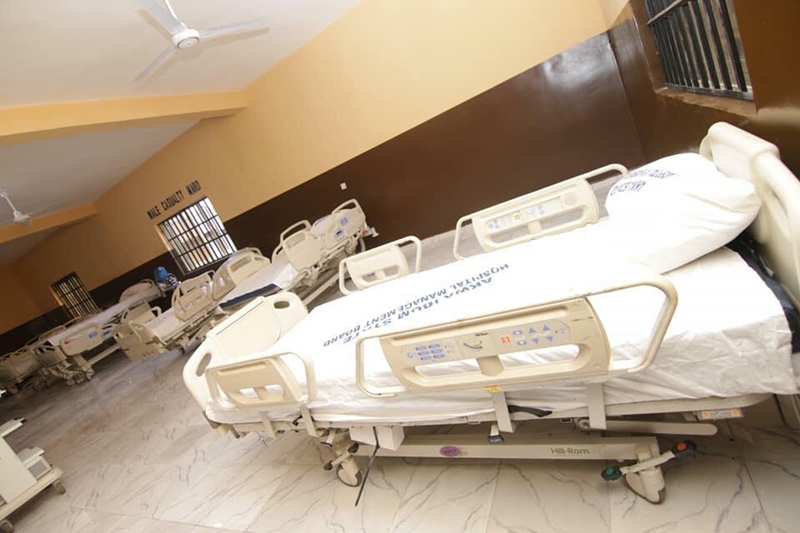 The hospital which had suffered from years of neglect and dilapidation was an eyesore until Governor Emmanuel arrived during the 2017 democracy day celebrations in May to kick-start the process of giving the facility a facelift.

The Governor who was accompanied by his deputy, Mr Moses Ekpo, former Governor of the State Otuekong Idongesit Nkanga, serving and former national and state assembly members, recounted before the emotionally excited crowd that the condition of the hospital during his visit last year was so bad that he had to prevent the cameramen from taking pictures.

He said the complete reconstruction of the hospital blocks, the remodeling and re-equipping as well as the perimeter fencing, were part of his desires to revamp the health sector in the state.

Governor Emmanuel who had previously rehabilitated and re-equipped the St. Luke’s Hospital at Anua, the Etinan General Hospital, the Ikono General Hospital, however said the Ituk Mbang Hospital has the biggest accident and emergency department because of its strategic position within the Uyo capital city and the proximity to the state airport.

He said the second phase of the Hospital was going to commence immediately with the rehabilitation and furnishing of the School of nursing and midwifery, which is behind the hospital.

He thanked the early missionaries for their efforts in establishing major amenities in the state, and also thanked the community for their support to the realization of the project.

The Governor announced that he was executing similar projects in Ikot Okoro, which is almost completed, as well as the ones at Eket, Okobo and Oron, but expressed doubts over his ability to go round to commission all of them.

“This is the third of the hospitals we have completed with equipment fully digitalized,” he said, announcing that 100 percent of the facilities were brought in from the United States of America.

While dismissing the outcry of non-performance from the opposition, he said that the opposition would always opposed a programme irrespective of how laudable they find it.

“Even the Holy Bible says that you will rule in the midst of your enemies. This means that if you don’t have people who hate you, then you are not fit to be a leader.”

Goodwill messages were received from the member representing Uruan in the state house of assembly, Hon. Aniekan Bassey and the representative of the Paramount Ruler Edidem Cosmas Nkang, said their people were overwhelmed with the volume of love shown by the governor through the new roads in the area, creation of a new clan, and the remodeled new hospital.

Edidem Nkang said the meeting of the ancient clan council in the order of the tradition of their land has instructed that every chief works towards the reemergence of the governor in 2019.

“Whether he consults us or not, we have spoken and it is irreversible that the Governor who has done so much in one term can do even more in another term.”

On his part, the chairman of Uruan, Mr Henry Udoh said no governor had shown any genuine interest in the affairs of Uruan since the advent of democracy, and promised that his people did not mince words when they vowed to support him till 2023.

The event was interjected by a colourful expression of happiness and appreciation by the cultural troupes, the women and youths of the area.