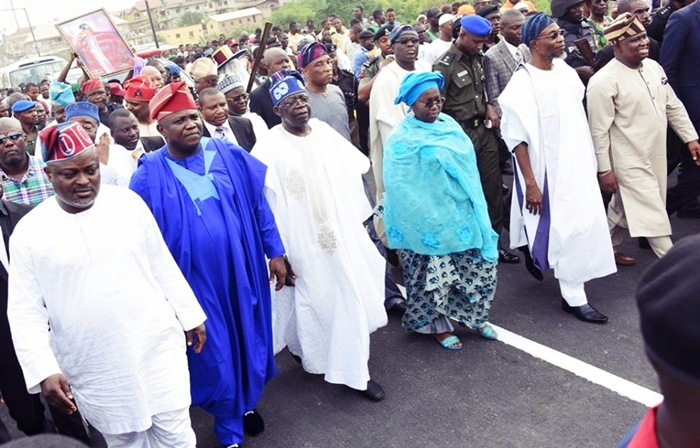 The National Leader of All Progressives Congress (APC), Asiwaju Bola Ahmed Tinubu on Wednesday poured accolades on the Governor of Lagos State, Mr Akinwunmi Ambode over his sterling performance in the last 22 months, saying that the Governor has made him proud.

Speaking while commissioning network of roads, link bridge and health centre in Alimosho area of the State as part of activities to mark his 65th birthday, Tinubu said the achievements of Ambode in office was a reflection of a Governor who is not only a thinker but a doer, and expressed satisfaction that he was delivering on the promises to the people.

He said: “Akinwunmi Ambode has reflected that clearly here today. I want to say thank you because experience is a great teacher and I am experienced. I am on the spot and I have watched things in Lagos since my tenure ended.

“I was worried hell when you (Ambode) took over, not about your credibility, character or capacity, but because however wise or smart a man is, if there is no resources to back the ideas, production would be zero, progress would be zero.

“When you (Ambode) took over, I know you inherited a burden of debt. The debt profile of Lagos was high, I was wondering how you will reengineer and face the challenges to make progress.

“Today, I can see your report card, you have scored well, and you have shown prudency especially in the judicious use of resources of the State.

Tinubu said all over Lagos, the results of good governance was being felt by the people, and wished Ambode sound health and wisdom to continue to lead the State.

“All over Lagos, we are seeing the results. At Oshodi, on our way down here, you can see what is happening there, that place is a construction site. It used to be a den of robbers but what is going on there now is developmental activities for the benefit of the entire country.

“Ambode is very quiet, very peaceful, not a noise maker, but he is delivering on the job.

“Today, you (Ambode) have given me a good birthday present. This is a great opportunity for me to be very proud again.

Therefore, if we can continue in this direction of infrastructural development in the manner Governor Ambode is moving, Lagos will soon match international states or country anywhere in the world” Tinubu said.

In his remarks, Governor Ambode described the event as a historic day in the life of the people of Alimosho and the State in general.

He recalled his visit to the Aboru area in March 2016, saying that aside the state of the road which was totally unacceptable, there were reports of series of deaths and fatal accidents caused by the presence of a valley, adding that he immediately directed that work should commence in the area.

“Exactly one year after, we are here to keep our promise to the good people of Aboru, Abesan and other communities and reaffirm our commitment that no community or area will be left behind. Every Lagosian counts. We are a government of inclusion,” the Governor said.

He said the 480 metres bridge linking Aboru to Abesan, both in the Agbado Oke-Odo Local Council of Alimosho Local Government Area would significantly ease the burden of travel between the two communities by reducing travel time and eliminating the risks associated with its non-existence.

He listed the roads to include Church Street, Giwa Street, Victor Fagbemi Road, Ogunfayo Road, Ogundare Street, Salami Kazeem, all totalling 5.5km with drainage, walkways and street lights adding that the road network would ease the pressure on the Abeokuta Expressway and links residents with Iyana Ipaja, LASU-Iba Expressway.

Governor Ambode also flagged off the commissioning the construction of a network of roads within the boundaries of Lagos and Ogun States, saying that it was in honour of Asiwaju Bola Ahmed Tinubu, whom he described as the brain behind the 21st century Lagos.

He expressed optimism that the roads which have been identified for immediate construction and rehabilitation would complete the new face of Alimosho constituency, saying that work would commence next week.