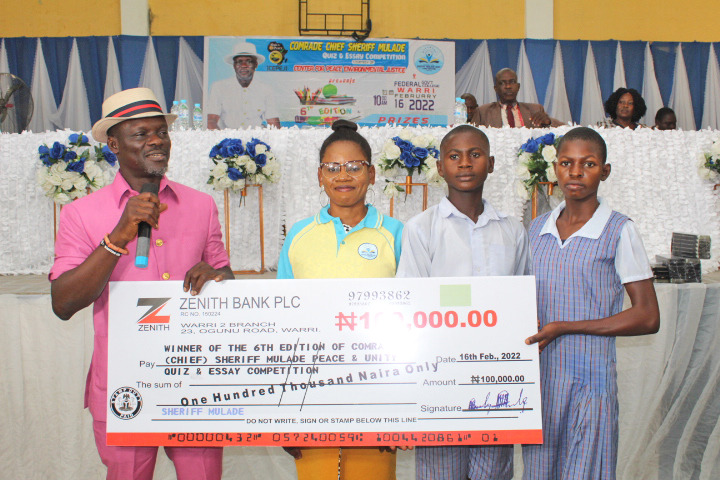 The competition which was organized by Center for Peace and Environmental Justice, CEPEJ in collaboration with Chief Sheriff Mulade Foundation sponsored by other partners had 14 Schools in participation at the Federal Government College Warri, with dignitaries from the Delta State government, CIEs, NUTs, CSOs and LGA chairmen.

The National Coordinator of Center for Peace and Environmental Justice, Comrade Mulade, in his speech said, the annual Inter-LGA competition is aimed at bridging the gap between riverine areas, rural schools and their urban counterpart so that the coastal schools can have a full taste of what they have been denied in terms of academic competition and exposure.

The peace Ambassador while speaking on peaceful coexistence in Delta state said the competition is an opportunity to promote and sustain the existing peace among the ethnic nationalities in the Communities within the selected region by promoting the love that exist particularly Ijaw, Itsekiri, Urhobo and Isoko ethnic groups.

He appealed to State Governor, Ifeanyi Okowa and Governors in the South-South Region and Nigerians in general to pay more attention to the improvement of the Education sector by promoting Rural and Riverine Education to achieve SDG 4, Quality Education.

While congratulating the winners, Chief Mulade who is the Ibe Sorimowei of ancient Gbaramatu Kingdom in Warri South West LGA of Delta State appealed to stakeholders across government, International Oil Companies (IOCs) and others in the private sectors “to pay more attention to the improvement of the education sector and to promote rural and riverine education” so that Nigeria can “meet up with the pace of global advancement in technology, as seen in civilized countries.”

He stated that; “The competition has helped to foster unity, peaceful coexistence and demonstrated that even if you have little you can contribute to education. Students should use this opportunity to study hard”.

She said what Chief Mulade is doing, shows that education is a reality, not a scam, stating that when the programme started years ago, it was within LGAs around coastal communities, now it has extended to the entire Delta State which is a welcome development.

Also in attendance were three beneficiaries of the Chief Comrade Sheriff Mulade Quiz and Essay competition: Miss Soyinka Funmi from Erejuwa II College (2021), Warri South, Miss Dariji Success from Tsekelewu Secondary School, Egbema (2019) Warri North and Miss Amos Christabell from Ukpiovwin Secondary School, Udu (2021). They also gave testimonies of the positive impacts that the programme has had on them.

Highlights of the programme include the presentation of the 1st, 2nd and 3rd prizes to winners of the quiz and essay competitions, sharing of school bags, notebooks, and mathematical sets to students in attendance, and group photograph session.