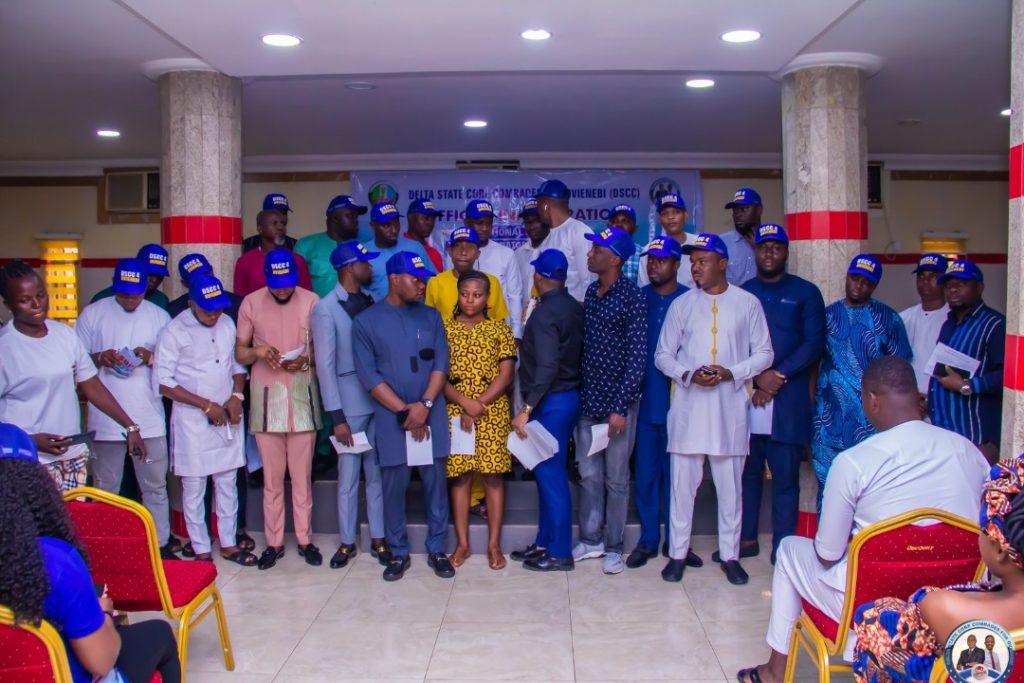 2023 frontline youth support group, Delta State Core Comrades (DSCC) for OVIENEBI with membership strength of over three thousand youths across Delta State and beyond, in and out of school campuses and alumni-comprising of old, new and upcoming comrades, has thrown its weight behind gubernatorial ticket of Senator Ovie Omo-Agege and Rt Hon Friday Osanebi.

According to the convener of the group and the National Co-ordinator, Comrade Esiri Kotor during the inauguration of the National Executive, Senatorial Coordinators, Local Government Coordinators and also unveiling of DSCC ambassadors in Asaba, he disclosed that “the group has decided to its weight behind the APC ticket of Omo-Agege and Osanebi because of their individual contribution to the advancement of the state and Nigeria.” He added that, “imagine what they would collectively do when they take over Osadebay House”.

Comr Kotor noted further that “we are particularly excited because Rt. Hon Friday Osanebi is young, brilliant, resourceful, energetic and a round peg in a round hole, who would add developmental values to Delta State.”

He further assured the gubernatorial candidate and current Deputy President of the Nigerian Senate, Sen Ovie Omo-Agege of an overwhelming massive mobilization of real voters from the nooks and crannies of the State to deliver the Omo-Agege and Osanabi ticket 100 percent during the 2023 election.

Administering the Oath of Office on the new executive members of DSCC, Chairman of the occasion, Senior Comrade Progress Omo-Agege popularly called King of Politics (KOP) stated that, “People now respect people with Permanent Voters Card (PVC). This is the first time a house of Assembly Candidate is attending an event of comrades, saying that “Senator Ovie Omo-Agege and Rt Hon Friday Osanebi are members of the Comrade community, hence they will not and cannot forget the Comrade Community for their commitment.”

Also speaking at the elaborate event, Olorogun John Oyibokwifi, the APC Delta State House of Assembly candidate for Ughelli South 1 added that “we are sure of Senator Ovie Omo-Agege’s competence, capacity and track record of achievements as a Senator and Deputy Senate President (DSP) of the Federal Republic of Nigeria. The Federal Polytechnic In Orogun, speaks for itself loud and clear amongst others”

He also assured the group of his total support and commitment, while stressing on the need for each of the youth as canvassers, to go back to their respective polling units and kick-start a door to door engagement with prospective voters about the party and its candidates at all levels in preparation for the 2023 elections.

2023: Delta South PDP Leaders Converge for Edevbie
Oborevwori’s Victory, Not A Mistake but an Act of God – Okpobor
Advertisement