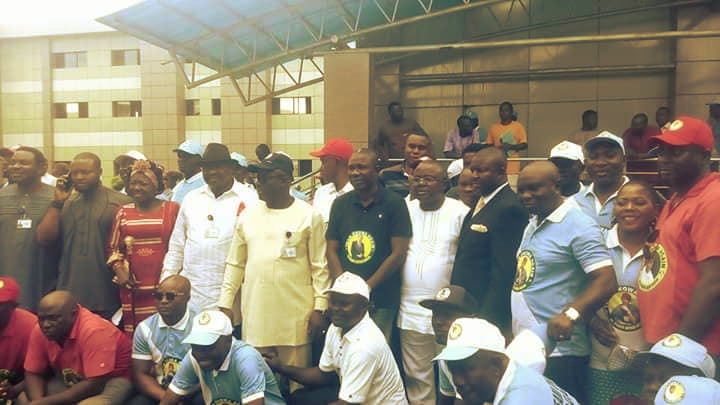 Ahead of the 2019 general elections, the Speaker, Delta State House of Assembly, Rt. Hon. Sheriff Oborevwori has appealed to PDP members in Sapele local government area to live in unity and sustain the thriving Peace in the area.

Oborevwori made this entreaty when members of Team Okowa Again, led by its National Coordinator, Hon. Austin Ayemidejor paid him a solidarity visit at the Assembly Complex in Asaba. The Speaker expressed his desire for Sapele PDP to continue to live as one “because it is only in unity that we can stand”.

In his words, “What we want is Peace, we have that peace in Sapele and we want to sustain that peace. I want us to live together. The kingdom in one, Okpe today is one, we have only one King and the people there live together and we love ourselves. I believe that this unity will continue to be one.”

The Speaker further stated that he was amazed by the solidarity visit and that Members of the House were also surprised seeing the crowd of eminent PDP supporters paraded by the political group. He declared that the members of Team Okowa Again are grassroots politicians that can win elections in Sapele.

Oborevwori enthused that, “This is not a hired crowd, these people by all standards are doing very well. If by 2019 the people that came here today work in their own area, they canvass in their area for votes, I believe that the result we got in 2015 will be a child’s play because 2019 will be something else.”

“I am aware of what the state governor is doing in Sapele, the dualization and others. Some jobs are ongoing and some have also been completed and I believe that with what the Governor has achieved, what you have to pay him is to return him back in 2019.

So we are happy to receive you people, we will continue to work together to see how we can move this state forward. What we want is Peace and we have that peace in Sapele. We want to sustain that peace, I want us to live together,” the Speaker reiterated.

Speaking earlier, leader of the delegation, Hon. Austin Ayemidejor said they were at the State Assembly to show solidarity with Rt. Hon. Sheriff Oborevwori and also celebrate with him on his emergence as Speaker.

“We have come to pay solidarity visit to you and to celebrate you. You have always been with us, supported us, cooperated with us, lifted us up in your own way. Even before you became a member of the Assembly, as a Special Adviser, as a community leader, as the Ukodo of the Okpe kingdom.

Going further, Ayemindejor observed that God in his infinite wisdom has elevated Oborevwori at this critical time to liberate Deltans.

The leader of the group who praised the emergence of the speaker stated thus, “Your emergence caused a monumental whirlwind of celebration and jubilation across the length and breadth of Sapele. Your emergence can be likened to the fall of the walls of Jericho. We are not going to mince words, we will be very blunt, very courageous and bold that we are your brothers, we will not deny you.”

“Let me re-echo that as you have contributed immensely to the transformation of Okpe kingdom, that you should also bring the wealth of experience to the state to assist the Governor to transforming Delta State.”

The group expressed their total support for the second term ambition of  Governor Ifeanyi Okowa come 2019 because his overwhelming achievements even in the face of scarce resources, should be appreciated by all. “So our people came together to put this organization in place to carry out political evangelism to win souls for the PDP, to support his Excellency’s SMART Agenda in transforming Delta state,” Ayemidejor harped.

In his remarks, the Chairman of Sapele Local Government Area, Hon. Ejaife Odebala who was part of the delegation said that Team Okowa Again is not a hired crowd but people who are happy with Okowa assuring that the Team will do their best to support the Governor always.

He reiterated that Sapele is excited on the emergence of Rt. Hon. Sheriff Oborevwori as the Speaker of the Delta Assembly and acknowledged his elevation as God’s design.

High point of the visit was the presentation of Team Okowa Again T-shirt and Face cap to the Speaker which he quickly put on in confirmation of his believe with the group’s vision.