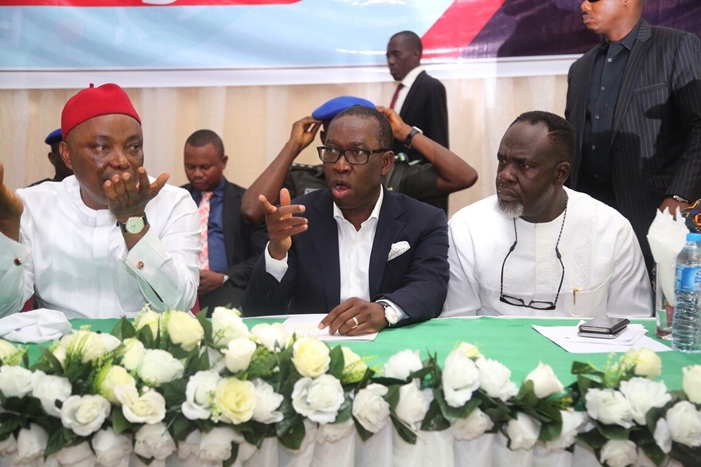 Delta State Governor, Dr Ifeanyi Okowa has assured aspirants for different political positions on the platform of the Peoples Democratic Party (PDP) that the primary elections that will produce candidates for the 2019 general elections will be free and fair in the state.

Addressing members of the PDP at the Delta North Senatorial District stakeholders’ meeting in Asaba on Friday, May 10, 2018, Governor Okowa said, the power of the people to choose their candidates is a supreme power that nobody should toy with.

He advised those who have the intention to contest for the party’s primaries to consult with the people and shun the use of abusive languages.

“We have the right to aspire for any political positions, but we should conduct ourselves in honourable ways in our campaigns, in campaigning, you talk about yourself, you don’t talk about others, I campaign with what I can do and what I want to do and let the electorates decide,” he said.

The Governor emphasised, “aspirants, please, do not malign others so that we do not destroy ourselves before the elections, we are going to have free and fair primaries and all party chairmen should work with us in that direction.”

“No local government party chairman should take a strong position on any aspirant and if before the election we hear that there is any local government party chairman who is taking a strong position on any aspirant, that chairman will be removed from office,” Governor Okowa who recently conducted the gubernatorial primaries of Ekiti State adjudged to be free, fair and acceptable said.

Governor Okowa decried situation where some political office holders were alleged not to be paying their dues, saying, “we need to know those who are not paying their dues, I have to believe that the party is meeting because, any political appointee that does not attend party meetings should resign, you are holding the appointment because we won the election on the platform of the party.”

Chairman of PDP in Delta North Senatorial District, Hon. Moses Iduh had in his address, said, “we join the family of the PDP in Ekiti State and indeed, the entire federation in giving accolade to our very own, His Excellency, Senator Dr Ifeanyi Okowa, in whom we are pleased, for the successful conduct of the Ekiti PDP governorship primary which was adjudged free, transparent and credible, even by the aspirants who lost.”

He disclosed that the PDP in the state was recording successes because of the delivery of democratic dividends by the Governor.

Leaders of the party spoke at the meeting while chairmen of the PDP in different local government areas of the state gave strong reports from their areas.