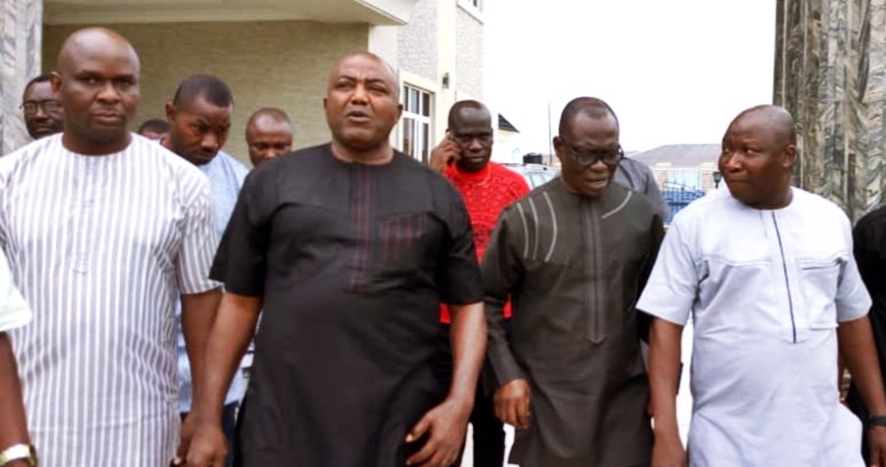 … As Okowa Gets Confidence Vote From Isoko North PDP

Isoko North Chapter of the Peoples Democratic Party (PDP), has passed a vote of confidence on Delta State Governor, Senator Ifeanyi Okowa with declared support for his reelection bid ahead of the 2019 general elections.

The confidence vote was passed during a stakeholders and members meeting of the party hosted by Minority Leader of the House of Representatives, Hon. Leo Ogor in his residence in Ozoro, Isoko North Local Government Area.

The confidence vote followed a motion by Dr. Chris Akpotu who described governor Okowa as a development colossus, was seconded by Dr. Jacob Oboreh, the immediate past Rector, Delta State Polytechnic, Ozoro and was unanimously passed following a voice vote by Pioneer Speaker of the State House of Assembly, Rt. Hon. Emma Okoro who presided ceremoniously.

Addressing the over 2000 members of the PDP who attended, Hon. Leo Ogor said he was elated over the teeming response of members to the meeting adding that it is a clear indication of how ready they are for the 2019 general election.

Ogor commended members of the party for their support and called for unity and synergy amongst them.

Former Secretary to Delta State Government, Comrade (Chief) Ovuozourie Macaulay who spoke, advised stakeholders and members against divisive actions and on the need to strive to keep the party united.

According to him, PDP is an Isoko Party and Delta State is a PDP state with a call on members to jettison Social media hype which may not be the true picture.

Others who spoke including Majority Leader of the Delta State House of Assembly, Hon. Tim Owhefere and the State Commissioner for Housing, Arch Joseph Ogeh, said the All Progressives Party (APC), have self destruct and could not stand in Nigeria again.

They urged members of the party to remain steadfast as the PDP would in no time, win back it’s lost glory. “A well attended party like this gives a clear message that the party is strong. R-APC and N-PDP are all PDP. Nobody will leave PDP. The party will not fall. APC has successfully destroyed itself. We are going back to the villa. We are starting it from the state.”

Earlier, Isoko North Council Chairman, Hon. Emmanuel Egbabor and PDP Chairman, Isoko North, Prince Godwin Ogorugba said the essence of the meeting was to allow for members of the party to know the status of the party and get first hand account from various wards of the local government.

While Egbabor said Isoko North is the most peaceful local government area in Delta State owing to the peoples support, Ogorugba cautioned social media user and rumour mongers to beware of hate media.

“All aspirants must key into the ambition of Governor Okowa. Let no one destroy the good image of the governor. Everything presumed wrong will be corrected. This is a meeting for unity and not for insults. Party meetings will henceforth be held at ward levels.” He added.

Meanwhile, front line Delta Assembly hopeful, Hon. Mike Ogwah in a chat with newsmen, said the turnout and readiness of party members foretold a clear cut victory for the party ahead of the 2019 general elections.