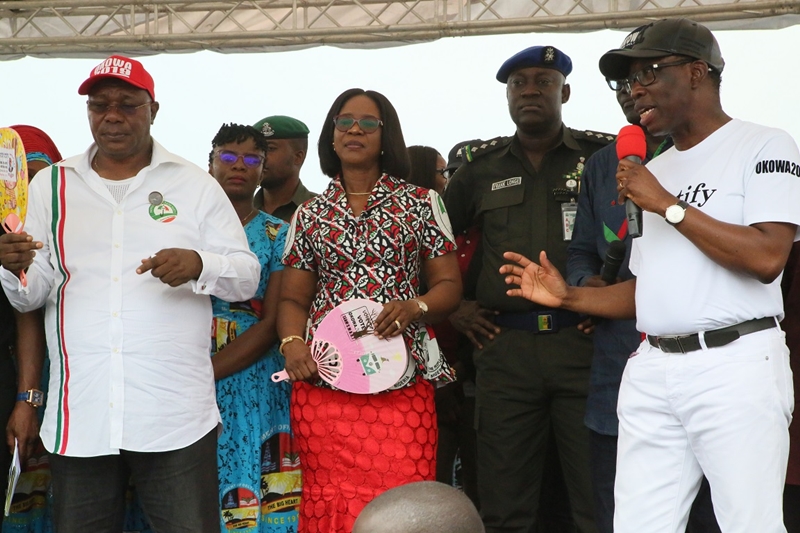 …Campaigns in Bomadi and Patani.

As Nigerians prepare to elect those who will lead them for the next four years, Delta State Governor, Senator Dr Ifeanyi Okowa has urged them to cast their votes for only candidates of the PDP as they have the blueprint to positively, transform the country.

The governor made the call Wednesday, January 23, 2019 during the campaign rallies of the Peoples Democratic Party (PDP) at Bomadi and Patani, Bomadi and Patani local government areas of Delta State respectively.

According to the governor, “holding political office in trust for the people requires qualified, capable individuals, and the PDP parades such qualified candidates; political positions is not for all comers.”

“While we engage in issue based campaigns, we should know that my opponent in the governorship race is a serial contestant and a serial loser; he is a bad product that is difficult to market,” he said, adding, “you, the electorate should elect capable and experienced hands; governorship position is not a training ground, those who wants to contest against me should first of all, hold other political positions.”

The governor who was accompanied to the rallies by his wife, Dame Edith and his Deputy, Barr. Kingsley Otuaro, thanked Deltans for their support, asserting, “we have a partnership that works, a genuine partnership between government and the governed, it has made the people to freely tell what government what they need, how they feel and we, as a government, has responded, we have empowerment programmes, we have constructed roads and because, you call me the road master, we will construct more roads in the next four years, we have built schools, we are working with our people and the smiling faces I see here, the crowd shows that our people are happy and we are happy when we know that our people are happy.”

He listed some of the projects his administration has executed and is executing in the area, emphasising, “vote for all the candidates of the PDP, we are sure of victory, because we have handed over the campaign to God, no one can stop us.”

They gave reasons why Alhaji Atiku Abubakar should be arrested as President, Governor Okowa should be re-elected as Governor to complete two terms of eight years and vote for all the candidates of the PDP.