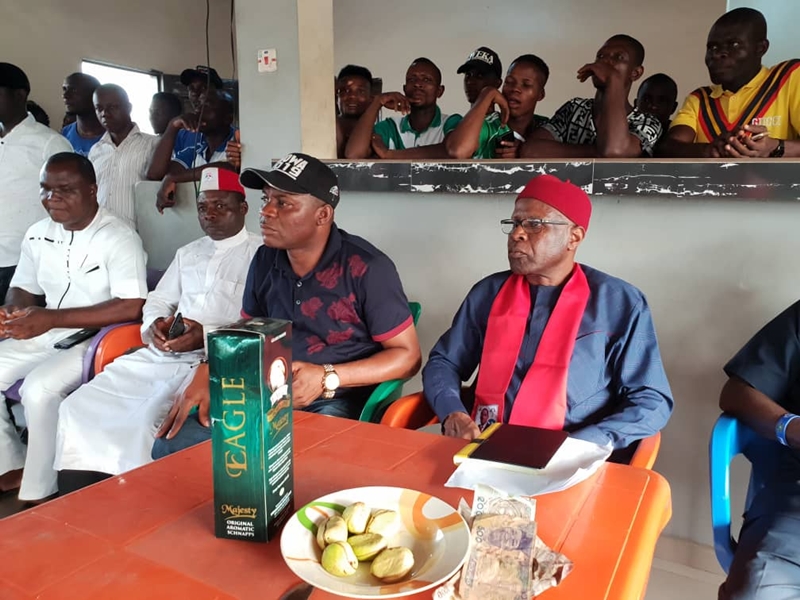 Ahead of the February 16 and March 2 general elections, the Peoples Democratic Party (PDP) in Delta State has taken its Ward-to-Ward and door-to-door campaign/ sensation to Ward 2, Ndokwa East Local Government Area of the State.

Leading the campaign team, comprised of prominent PDP stalwarts like Hon Ossai Ossai who was unavoidably absent but contributed immensely to its success, the Commissioner for Lands and Survey, Hon Chika Ossai, Wards and Units heads, community leaders and many other party leaders, the Ward leader, Pharmacist Paul Enebeli, told PDP loyalists in the Area that, because the State Governor, Senator (Dr) Ifeanyi Okowa has done marvelously well, within his first four years in office, there was the need to campaign rigorously in order to return him to Government House for a second term in office.

Also, he said, because the PDP is the party that has truly kept to the tenets of democracy and is the only party that can bring Nigeria out of the present socio-political and economic mess, there was the need for people in the Ward to vote PDP all the way in the forthcoming elections.

Pharmacist Enebeli particularly urged members of the party in the Ward to bury their hatchets now that the general elections are a few days and weeks away and focus on the collective interest of the party, which is to win 5/5 in the area.

For this reason, he said, the task of returning the presidential candidate of the PDP, Alhaji Atiku Abubakar, the state governorship candidate, Senator Dr Ifeanyi Okowa, the candidate of the party for the Senate, Senator Peter Nwaoboshi, that of the House of Representatives, Hon Ossai Ossai and all other PDP candidates during the elections was a task for every member of the party in the wards and beyond.

He urged party members in the Ward to arm themselves with their Permanent Voters Cards (PVC) before the elections and be ready to vote out the All Progressives Congress (APC), from presidential to House of Assembly and vote one hundred percent for the PDP.

Reminding the Ward members that they have a remarkable status of voting all the way for the PDP in the past, he said, come February 16 and March 2 they should come out en-mass and make a loud statement with their PVC that, PDP is the only party they know and the only party on ground in Delta State.

“You must come out from your homes to vote massively for all PDP candidates on these days and I can assure you that Governor Okowa and the party wouldn’t fail to redouble the dividends of democracy in this Ward,’’ Enebeli said.

In all the communities, the people expressed their love and gratitude to the State Governor, Senator (Dr) Ifeanyi Okowa and the PDP, promising to vote massively for all PDP candidates in the general elections.