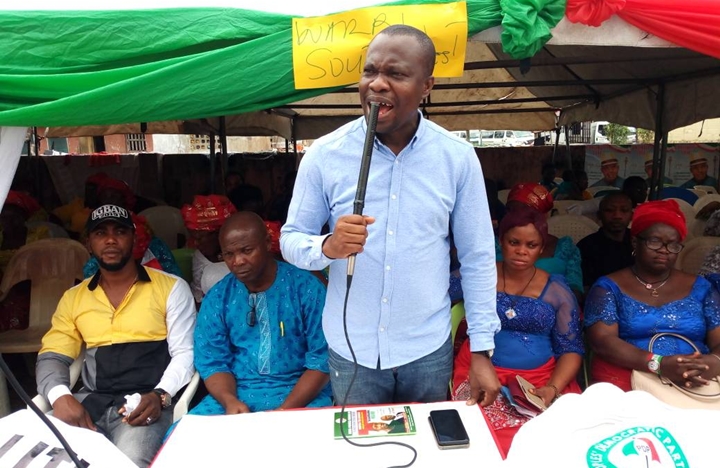 A former People’s Democratic Party, PDP Youth Leader in Delta State, Ambassador Andrew Igban has said Deltans are happy with the performance of Dr. Ifeanyi Okowa as Governor of the state and are determined to vote for him enmass for another tenure in the 2019 general elections.

Igban stated that the people understand that the best way to appreciate the governor for the good works is to support him to victory to consolidate on the remarkable achievements of his administration.

Speaking during a rally organized by Delta Political Vanguard, DPV, in Patani in continuation of the statewide mobilization for the second term bid of Governor Okowa, the frontline aspirant to Warri South West Constituency seat in the Delta State House of Assembly, said “even those in opposition APC can attest to the good works of Okowa as Governor of Delta State but for politics of bitterness, they chose to remain silent”.

Igban stressed, “You can feel the bitterness and unrelenting efforts of the opposition leaders to blackmail and misinform the public on the performance of Okowa as Governor in the past three years. But despite the blackmails, distortion and misinformation by the haters of the government, the popularity of the administration is increasing by the day. Okowa’s good works are speaking for the party. Deltans are happy and will cast their votes for Okowa and PDP candidates”.

Continuing “We are in the field. We are not taking any step for granted, hence the statewide rallies by DPV. Today we are in Bomadi/Patani Federal Constituency to garner the support of the people for our amiable governor. We had held similar rallies in other federal constituencies. We don’t want our people to be deceived with the kind of change at the federal level which plugged the nation into the part of retrogression. The message is simple. Get your PVC and vote Okowa and all PDP candidates in the forthcoming general elections for better future and more dividends of democracy “.

The former PDP Youth Leader who is the Coordinator, Delta Political Vanguard, Warri South West local government area, described as massive the turnout of Deltans at rallies so far held by DPV in parts of the state and affirmed the commitment of the leadership of the group, including Hon. Michael Diden, Ifeanyi Eboigbe and Askia Ogieh at ensuring that the vision and mission of DPV are met.

Igban explained that his aspiration to represent the people of Warri South West in the Delta State House of Assembly was borne out of the conviction that he can provide quality representation to the constituents, saying that he will work in synergy with all critical stakeholders to bring development of the area.

“My aspiration to the Delta State House of Assembly is divine. It is God’s own project. I have appealed for the support of my people and I know that by His grace we shall get there. The first stage is delegates election. We are doing our best as humans to get the votes and leave the rest for God who gives power”, Igban emphasized.