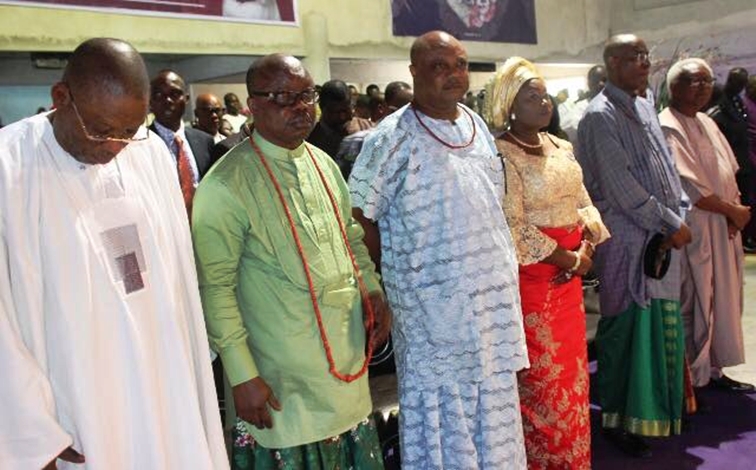 The All Progressive Congress, APC has commenced the journey to victory in Delta State, with the dedication of its campaign committee to God.

The event which witnessed the attendance of many political bigwigs of the party, including ministers of God from different denomination, was held at Rainbow Christian Assembly, Warri, Delta State.

Speaking at the church service, the All Progressive Chieftains of Chief Great Ogboru, the Governorship flagbearer of the Party, former Governor, Dr. Emmanuel Uduaghan, Senator representing Delta Central, Senator Ovie Omo-Agege, and the factional Chairman of the party in the state, spoke in one voice that, 2019 is for the party to take over the governance of Delta state and bring a new dawn, and light of development to what they said its years of slavery and underdevelopment of the state, by the Peoples Democratic Party.

Dr. Emmanuel Uduaghan who spoke after raising a popular gospel tune, “Awesome God”, with the him, and Chief Great Ogboru now in one camp, the issue of who wins the 2019 elections in delta state, is already a settled one, as both who had being foes in the past, are now together.

“I know how we had being doing it before, and with we now in one camp, victory is already sure come 2019.” He said.

Speaking on the crises that had rocked the state chapter of the party, Dr. Uduaghan, while acknowledging the crises, said peace had returned to the party, as he assured the church and Deltans of purposeful governance if the party wins.

“APC had had, challenges, but peace had returned to the party.”

On his part, the Senator representing delta central, Senator Omo-Agege, affirmed that with the configuration of the different personalities in the party, the time to liberate the state had been set.

In an interview at the end of the thanksgiving, the senator stated that the focus of the state party leadership is to win convincingly in the state, and also return President Muhammadu Buhari in 2019.

“With the configuration put in place, especially of the personalities, Delta state will be liberated, and while I will return to the senate, we will also return President Buhari to power in 2019.”

The Governorship candidate of the Party, Chief Great Ogboru, assured the church and Deltans of better governance come 2019. He said now is his turn as it had been foretold.

He stated that because victory was already assured, that was while they had come to formerly dedicate the campaign committee and the entire process of the 2019 project to God, as the journey may not be smooth.

The state Factional chairman, Prophet Jones Erue, said that it had been shown to him that he will lrad the next governor of delta State to the governor house in Delta as the Chairman of the Party, and his assignment is to fulfil that in 2019.

In an interview with the Director-General, Ogboru Campaign Organisation, Chief Peters Omaruaye, described the dedication of the campaign structure first to God,  as a sign of matured politicking that the APC have adopted to provide  the party a resounding come 2019, “It may interest you to know that our governorship candidate, Chief Great Ogboru, as a man of faith ensures that whatever he does, he brings in God.

“So we decided to allow God to lead the way as we begin the process towards getting Delta electorates to make wise decisions by electing Chief Ogboru, Dr. Emmanuel Uduaghan, Senator Ovie Omo-Agege and other APC candidates, so that together we can salvage our dear state, by making it the pride of South South in particular and Nigeria in general,” adding, “The idea became more attractive because the times are not normal, so we are appreciating God in advance by building on solid foundation, because unless the Lord builds, we labour in vain.”

However, the different men of God who prayed during the thanksgiving/dedication had called on Deltans to allow the Holy Spirit to lead them to make a wise decision.

One of those who spoke and prayed was, Very Rev. Father Oghenekweruwe Abaka of the Warri Catholic Diocese, who asked that God’s Intervention through the Holy Spirit, will guide the minds of Deltans to make choices of their own, as he puts it.

“A heart turned to make a decision of peace, development, transformation and contentment. That god will Use all as an instrument to transform the state, to a desired place for all.”

The ministers told the members of the party, that 2019 will not be easy, and they have to work hard and pray to God always.

The event which was held at the Rainbow Christian Assembly, Airport Road, witnessed the attendance of many APC Chieftains across the state.

Among the ministers who spoke is the general Overseer of the Church, Appostle Dave Henman-Ackah, Prophet Gilbert Osei.

Revd Waive’s Coming Into Politics, A Big Plus For APC – Bodjor
2019: Delta Group Predicts Victory For Atiku In Presidential Polls