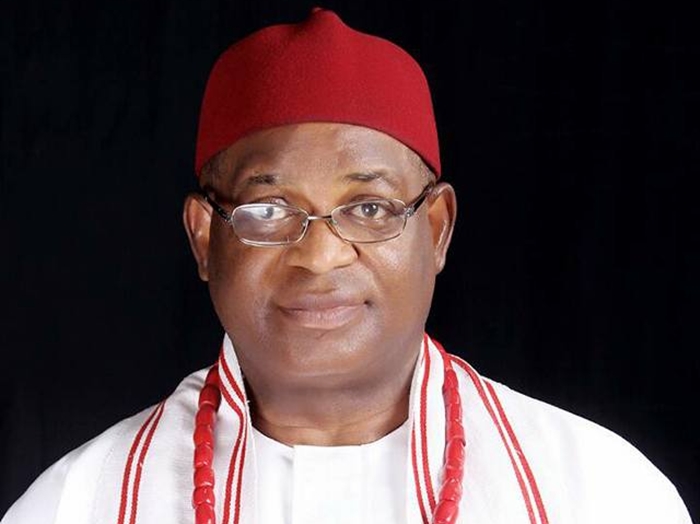 The apex Anioma sociopolitical organization and voice of the Anioma Nation has declared that any Anioma born politician contesting against Senator Dr. Ifeanyi Okowa for Governor in 2019 is a distraction.

Briefing journalists on Thursday May 10, 2018 at their Secretariat in Asaba, the Chairman of the Interim National Executive of Izu Anioma, Hon. Dr. Kingsley Ojie said that Okowa has done exceedingly well and deserves a second term of office come 2019.

He affirmed that the decision to make public their resolution that Okowa remains the sole candidate for Anioma is in the best interest of Anioma Nation.

Explaining further, he stressed that the other two Senatorial Districts of Delta Central and South had had their two terms of offices respectively, adding that it is imperative for every zone of the state to now be on the same page in ensuring that Okowa completes that two terms mandate for the Anioma extraction as had been unconventionally worked out politically.

“This arrangement is understood by the other senatorial districts, which formed the basis for their participating in the ‘Anioma Salute Okowa’, where they pledged to support Okowa’s second tenure. If that is a known fact by the other zones, how much more support do we now want to seek from our own Anioma brothers and sisters. For the fact that those aspiring for Governorship were unable to contest against or defeat Okowa in 2015, we will not allow them this time to act as distractions to this political equation that must see us complete our two terms of office as a people”, Ojei posited.

Speaking further, he appreciated every Anioma son and daughter and by extension Anioma friends all over the world, who showed solidarity with Anioma Nation during the honorary celebration of the Delta State Governor, Senator Ifeanyi Okowa recently. He also commended Okowa for appreciating the need and call to be celebrated and equally going ahead to support the process.

Ojei as a father, called on all Anioma sons and daughters to ensure they are registered and identified with Izu Anioma at any chapter they find themselves in Nigeria and abroad, adding that by the constitution and vision of the founding fathers of the apex umbrella organization, every Anioma citizen must be a member of Izu Anioma.

The Interim National Chairman none the less, informed the Press of the organization’s preparedness to conduct the Izu Anioma National Elective Congress, which is billed to hold tentatively by July this year. He however, admonished every Anioma stakeholder to key into the project with a view to producing a brand new formidable National Executive Committee members that will pilot the affairs of the group towards progress, unity and development of Anioma Nation.

Ojie in a nutshell, advised every Anioma group to join forces with Izu Anioma in line with the statutory and strategic vision of the founding fathers like Late Rt. Hon. Chief Denis Osadebey, Late Senator Nosike Ikpo, Late Chief Patrick Ozieh, Late Dr. George Orewa, Late Mr. Fortune Ebie, Chief Philip Asiodu and others; appealing to them not to be clogs in the wheel of progress.

“We must galvanize and harmonize our house and speak with one formidable voice at all times. Every Anioma platform for political, cultural, economic and social objectives is important; but we must strategically knit our synergies, partnerships and relationship in the leadership of Izu Anioma”, Ojie submitted.

2019: Why I Want To Be The Governor of Delta State – Ofehe
2019: I Will Stop Environmental Degradation in Ndokwa Nation When Elected – Ned Nwoko