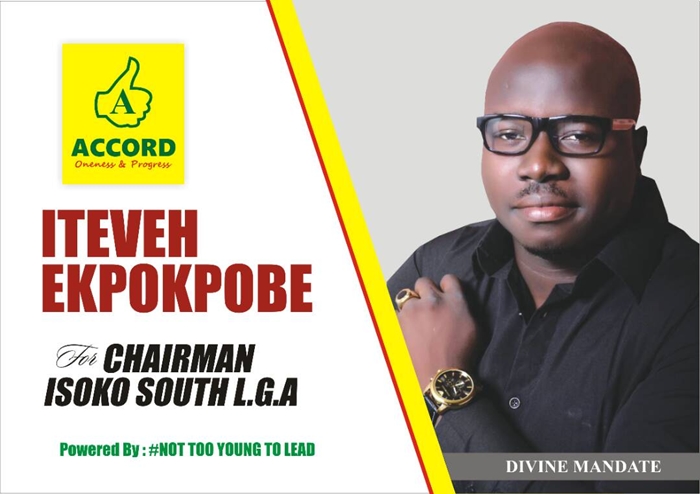 As the January 6, 2018 date for Local elections draw near,  the Chairman of Accord Party, Isoko South Local Government of Delta State, Comr. Iteveh Ekpokpobe, has said the party would clinch victory in all positions it’s contesting.

Iteveh said the All Progressives Congress (APC) and Peoples Democratic Party (PDP),  lacked viable structures to win elections except Accord Party,  even as he underscored the need for political parties to have physical structures at the grassroots before they can truly win elections at that level.

The party chieftain said that Accord is the delight of the people because it has a well articulated manifesto that would actualize the dreams and expectations of the electorate, simply coined “CASE”, noting that Accord is the party of the future as other parties are gradually becoming unpopular due to their persistent failure in delivering the dividends of democracy to the people.

While explain the meaning of CASE, he said that it is an acronym that stands for ‘Creating employment for youths through public private partnership’, ‘Agricultural revolution’, ‘Sustainable development through micro credit facilities for women’, and ‘Education standardization’.

According to Iteveh, the party which is mostly manned by the youths has graduates occupying offices within the party structure to give it the flavor of a youth oriented party.

Reacting to the prostitution of political parties by politicians, Ekpokpobe said that it was a result of lack of ideologies, as parties are merely used as platforms to contest and win elections in the country, stressing that such is not obtainable in Accord which according to him, has a strongly defined philosophy that is pro-development oriented.

Lamenting the poor state of Local Governments in the Country, he said that the leadership acumen of the party through the implementation of its manifesto would tackle the challenge of paucity of funds accrued to the local government, even as he said that development would be strengthened through harnessing the numerous benefits afforded by partnering with the private sector.