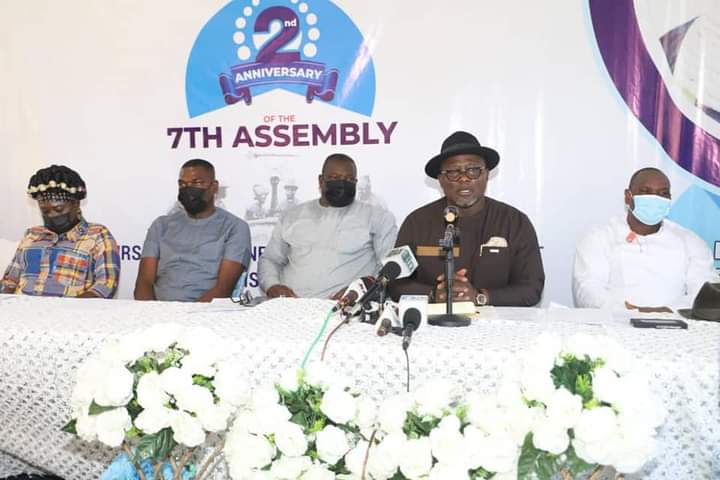 The Seventh Assembly of the Delta State House of Assembly has stated that the greatest achievement in its second year, was the passage of the Bills establishing three new Universities in the state.

The State Legislature disclosed this during a press conference as part of activities to mark the end of its second anniversary for the 7th Assembly on Thursday, June 10, 2021.

Briefing journalists at the Legislators Quarters, Asaba, Speaker of the House, RT. Hon. Sheriff Oborevwori informed that the House within the past 12 months, received “a total of Fourteen (14) Bills and thirty-four (34) Motions were received by the House. Nine (9) were Executive Bills, while five (5) were Private Member Bills. Out of the fourteen (14) Bills, nine (9) have been passed and eight (8) were given assent by the Governor. The remaining five Bills are still undergoing legislative consideration in the House.”

Oborevwori noted that, “One remarkable feat among the Bills passed and assented to, is the passage and establishment of the three new Universities in the State. This is to cater for our qualified teaming youths that wished to further their education to tertiary level but were not getting admissions due to limited admission spaces.”

He commended the State Governor, Senator Ifeanyi Okowa for his support and respect for the legislature and for being a champion of financial autonomy for all the arms of government in the State. He also thanked Deltans for their love and prayers.

While appreciating God for the success recorded in combating the global Covid-19 pandemic which also disrupted the activities of the Delta State House of Assembly, the Speaker paid glowing tribute to the late Majority Leader of the House, Hon Tim Owhefere.

He said, “Sadly though, in this same period under review, the Delta State House of Assembly lost one of its finest and very experienced lawmaker in the person of Late Hon. Tim Kome Owhefere, Esq., KSC, who until his death on January 27th, was the Majority Leader of the House. His demise has remained a huge loss to the House till date. May his gentle soul continue to rest in perfect peace.”

The Speaker however assured Deltans of their continued legislation of development bills and laws, saying, “as we begin a new Session today, we pray that the challenges of the Second Session should not repeat itself to enable the House to comprehensively provide good governance and deepen the tenets of democracy to the benefit of the good and peace-loving people of Delta State.

“It is our desire to make Delta State House of Assembly a rallying point for all constituents who have elected us to serve them. We will remain committed to service and democracy. We will continue to strive with total commitment and sense of accountability to facilitate the implementation of the Okowa Administration policies and programmes.”

The only executive bill received by the House that is yet to be assented to, is the Traditional Rulers and Chiefs (Amendment) Bill, 2020 which has already passed third reading.