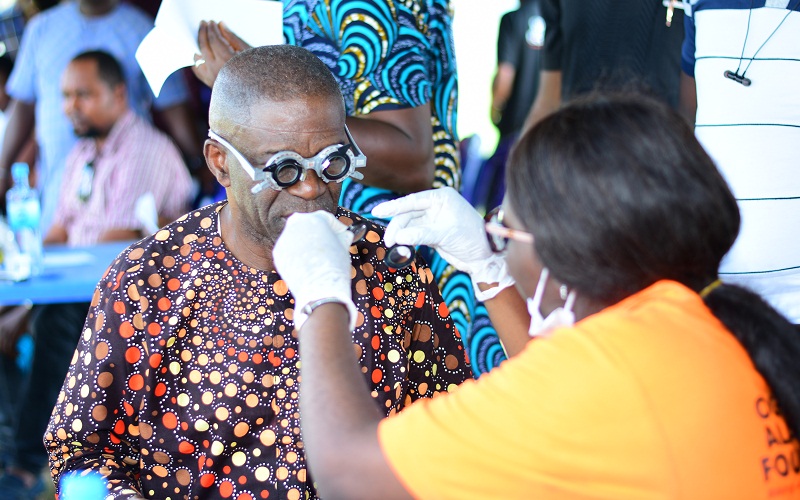 Over one thousand beneficiaries of free eyes test programme who also received free medicated glasses were seen in several shades of happiness on Thursday, March 5.

A Non-Governmental Organisation, Oghenero Alakpodia Foundation is the organiser of the free medical outreach tagged, “Vision at your doorstep” which held at Urogbe Primary School, Owhelogbo in Isoko North Local Area.

The Chairman, Isoko North Local Area, Hon. Emmanuel Egbabor, who flagged-off the programme, said it was sterling, considering the fact that it was meant to compliment government efforts in the health sector.

“I thank God for this day. I commend this young man for adding life to our people. He is assisting government at various levels to reach out to Isoko people who cannot do this for themselves. If a young man at his age can do this, it means there is hope for Isoko. We will continue to do more as a government to ameliorate the plight of our people.” Egbabor said.

In the same vein, President General, Isoko Development Union (IDU), High Chief Iduh Amadhe, said the last time he witnessed a programme of the magnitude was in 2017, which was organised by the government.

Amadhe stressed that the project, coming from an independent body was more commendable since it is meant to give back to society.

“The last time a thing like this happened was years ago by the Local Government Council, under the Chairmanship of Hon. Emmanuel Egbabor. It is very encouraging. The turn out is impressive. What our young man has done is commendable. He is not in government. He has used what he has to help the less privileged. His foundation will excel.” Amadhe stressed.

Alakpodia said the theme was aimed at bringing professional eye care at no cost to the members of the community and surrounding communities in Isoko North.

In his words, “Our drive is not to only create awareness on avoidable causes of blindness but also to enlighten beneficiaries of the programme on healthy ocular lifestyles to adopt to preserve their sight and vision for as long as possible.”

“The Foundation, through this outreach, will also provide ophthalmic aids in form of medicated glasses and ocular drugs according to each person’s visual needs to at least 1000 people.” He added.

Some of the Participants who spoke including Mr. Great Okobia, Mrs Cecilia Ubogu amongst others said it was the first time a programme of that caliber was taking place around them.

They expressed their gratitude and prayed for God to bless the organisers.

The Oghenero Alakpodia Foundation is a humanitarian organization with vested interest in ameliorating the conditions of indigent and elderly persons in the society.