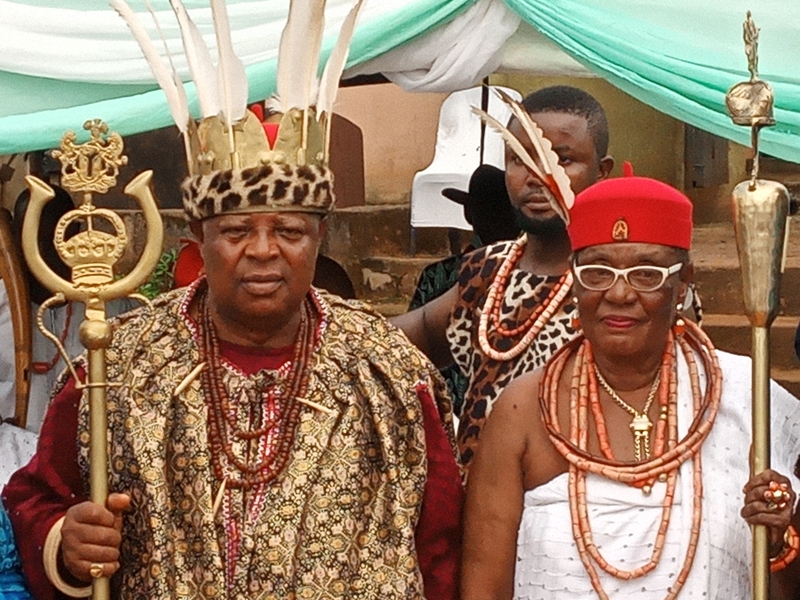 Omu Anioma, HRM Obi Martha Dunkwu has added another feather to her royalty with her coronation as NNEOHA by HRH Igwe Chukwunweze Patrick Okolo 1 of Nkpunano Nsukka Ancient Kingdom in Enugu State.

Nneoha which means, ‘Mother To All and Mother Without Borders’, was bestowed on the Omu on her 68th birthday, on Monday, October 19, 2020 at the Isi Aku community ground.

Eze Igwe Nsukka while conferring the revered title on Obi Dunkwu, described her as an icon of truth and boldness amongst the comity of traditional rulers and an embodiment of motherhood. “A great mother, a builder, a welfarist, a mentor, motivator, mother without borders, a home woman adorned with beauty and brawn”, he eulogized.

According to Igwe Okolo, “I, my people of the South East, Nigeria and the world have watched your impeccable activities and are pleased to identify with you; hence the need to also crown you Mother To All and Mother Without Borders (NNEOHA), to enable us tap from your wisdom, knowledge, understanding and then enjoy your example of proper motherhood.

“My prayer is that Almighty God will guide and guard you in the performance of your duties so that you will live more fulfilled and break more enviable records worthy of emulation”.

Overwhelmed by the conferment, Obi Martha Dunkwu appreciated His Royal Majesty, Igwe Chukwunweze Patrick Okolo 1 for the honour noting that she is proud of the people of South East who have over the years recognized her.

She said, “I didn’t know that while doing my God-assigned role on earth, people are keenly watching. The Nneoha Crown is a motivation to work harder, bearing in mind that somebody must play the role of a Mother To All or Mother Without Borders. A Mother is a home builder, a compassionate lover, a peace maker and the water that quenches the burning fire.

“While I remain optimistic of a male leadership that will speak in one voice and bring about the desired change, I will continue to lend my voice to push for greater Constitutional role for Traditional rulers as true agents of change at the community, State and regional levels, believing it to cascade into a harmonious, peaceful, united and indivisible nation.”

The coronation ceremony was attended by dignitaries from Anioma nation and Nsukka Kingdom including the HRM Obi Afamefune Kikachukwu – Obi of Ubulu Uno, Obi Adi Nwaokobia, HRM Omu Onyebuchibe Okonkwo, Chiefs of Nsukka Kingdom amongst others.

Obi Martha Dunkwu was crowned Omu Okpanam in 2002 and Omu Anioma in 2010. She is a recipient of many chieftaincy titles in Edo, Delta and Anambra States and holder of the Ivie-Urhu (Royal Beaded Necklace) courtesy of His Royal Majesty, Omo N’Oba N Edo Uku Akpolokpolo, Erediauwa, Oba of Benin Kingdom (Of Blessed Memory).