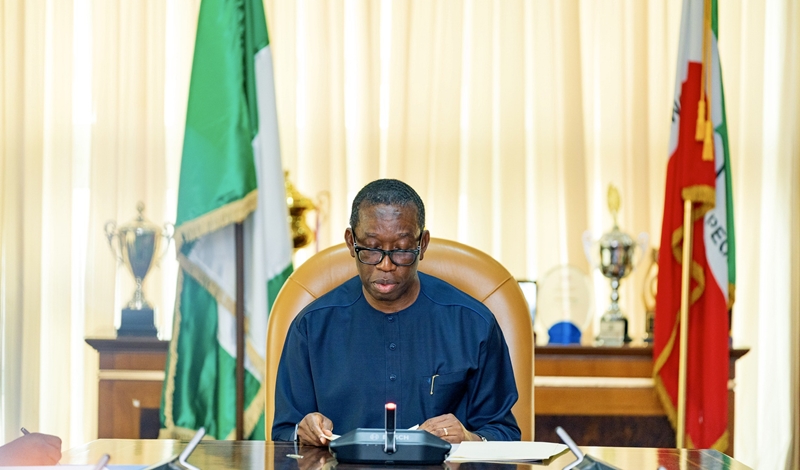 Delta Governor, Sen. (Dr) Ifeanyi Okowa on Tuesday, May 18, 2021 dissolved the State Executive Council shortly after the Council’s meeting presided over by him.

Also affected by the dissolution are Special Advisers, the Secretary to State Government, Senior Political Adviser, Chief Strategist of the government and the Chief of Staff.

The immediate past Commissioner for Information, Mr. Charles Aniagwu who was accompanied by the Chief Press secretary to the Governor, Mr. Olisa Ifeajika, made the disclosure while briefing journalists on some of the decisions reached at the Council meeting held at Government House, Asaba, and said that the dissolution was part of effort to restructure governance for better service delivery to Deltans.

Mr. Aniagwu added that before announcing the dissolution of State Exco, the governor thanked all members of his government for their contributions both those who have been there in the past six years and those who joined the train two years ago.

According to him, members of the dissolved Executive Council have been advised to hand over government property in their possession to the most senior government officials in their respective offices.

“The State Executive Council has been dissolved. All Commissioners are to hand over to their Permanent Secretaries with immediate effect.

“The governor, before announcing the dissolution of exco, thanked all members of his government for their contributions both those who have been there in the past six years and those who joined the train two years ago,” Aniagwu said.

Meanwhile, the former Information Commissioner disclosed that prior to the dissolution, the State Exco approved the construction and upgrade of facilities in the three newly established universities with the sum of N2.8billion to facilitate their seamless take off.

He said that the State Exco also approved the establishment of three new secondary schools at Otor-Iyede in Isoko North, Forcados in Burutu and Bomadi as well as a primary school in Ibusa town in Oshimili North Local Government Area.

Mr. Aniagwu further disclosed the the dismissal of Mr. Bernard Onomovo over his involvement in illegal inclusion of names into the state government’s payroll was also approved.

While saying that Exco equally approved the participation of the state in the Central Bank of Nigeria (CBN) oil palm initiative where over seven billion naira is to be accessed through cooperative, he disclosed that approval was also given for the construction of Equator Street and adjoining roads in Osubi, Okpe Local Government Area of the state.

See The 12 Point Communique Issued By Governors of Southern States In Asaba
6th Anniversary: My Administration Has Empowered Over 100,000 Youths – Okowa
Advertisement