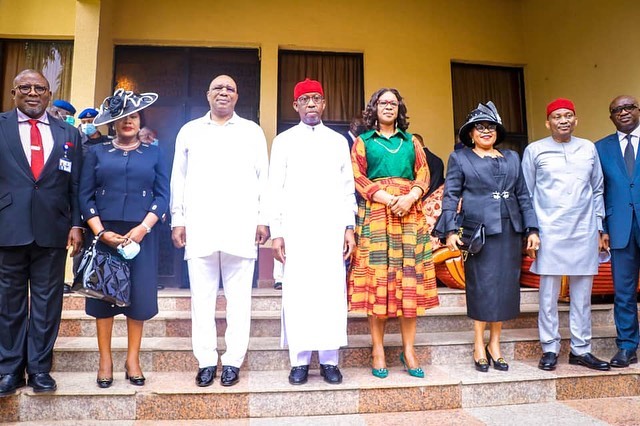 The Governor while swearing in the judges at the Unity Hall, Government House, Asaba, said that judicial education and constant training of critical workers was imperative in enhancing quality of justice delivery and performance of courts in the state.

He commended the Speaker and members of Delta State House of Assembly for their prompt confirmation of the judges for their offices, and said that his administration was blessed to have the Assembly as partner in progress rather than as a rival.

“History has been made today with the confirmation of Justice Theresa Diai as the Chief Judge of Delta State and Justice Patience Elumeze as President, Customary Court of Appeal, Delta State.

“Rarely does it happen that you have two women heading both tiers of the Judiciary in the state at the same time. As a state, we are proud to set the pace in this regard. I congratulate them.

“Let me also congratulate the Speaker and members of the state House of Assembly for the prompt manner they handled the confirmation of their Lordships.

“This administration is blessed to have a legislature that sees itself more as a partner with government than a rival. As long as this partnership is sustained, we shall continue to gain new grounds in our quest to build a smart, strong and safe Delta state,” he said.

The governor charged the judicial heads to continue in the tradition of team work, excellence and exemplary leadership in the stead of their predecessors.

“As you may have experienced by now, your new positions require a lot of patience, resourcefulness, dexterity to manage the demands and pressures on your time and space.

“I urge you to continue to promote, preserve and protect the principles of natural justice, fair hearing, equity and good conscience, which are the pillars upon which the judiciary rests.

“One area I want you to prioritise is judicial education, training and retraining. This is crucial to improving professional competence of judges and enhancing the quality of justice delivery and performance of our courts.

“Globally, the judiciary is constantly evolving, hence there is a compelling need to regularly update and upgrade your knowledge-base and that of other judicial officers through seminars, workshops as well as court manning to build competence in judicial skills and self awareness.

Okowa, however, said that the state was waiting further input from the parties to the Memorandum of Action entered into by the Nigerian Governors’ Forum with JUSUN and PASAN on some corrections to be made to the memorandum and the legal template which were due by next week.

“We are confident that Delta will meet the 45 days window for states to pass the amendments to return autonomy law for both the judiciary and the legislature.

“But just to put on notice that this is an amendment to our own laws because we have already started practicing both legislative and judicial autonomy in the state.

“Indeed this administration shall leave no stone unturned in a bid to continually raise the bar in enhancing the efficiency and quality of legislation and justice delivery in the state,” he stated.

Responding, Justice Diai said that the appointment of the Chief Judge and President of Customary Court of Appeal passes through many stages and expressed appreciation to all the people who made it possible, including the Governor.

She appreciated the Speaker and members of the Delta State House of Assembly for the prompt confirmation given to them.

The Chief Judge sought the cooperation of the executive and legislative arms of government with the judiciary in the task ahead.