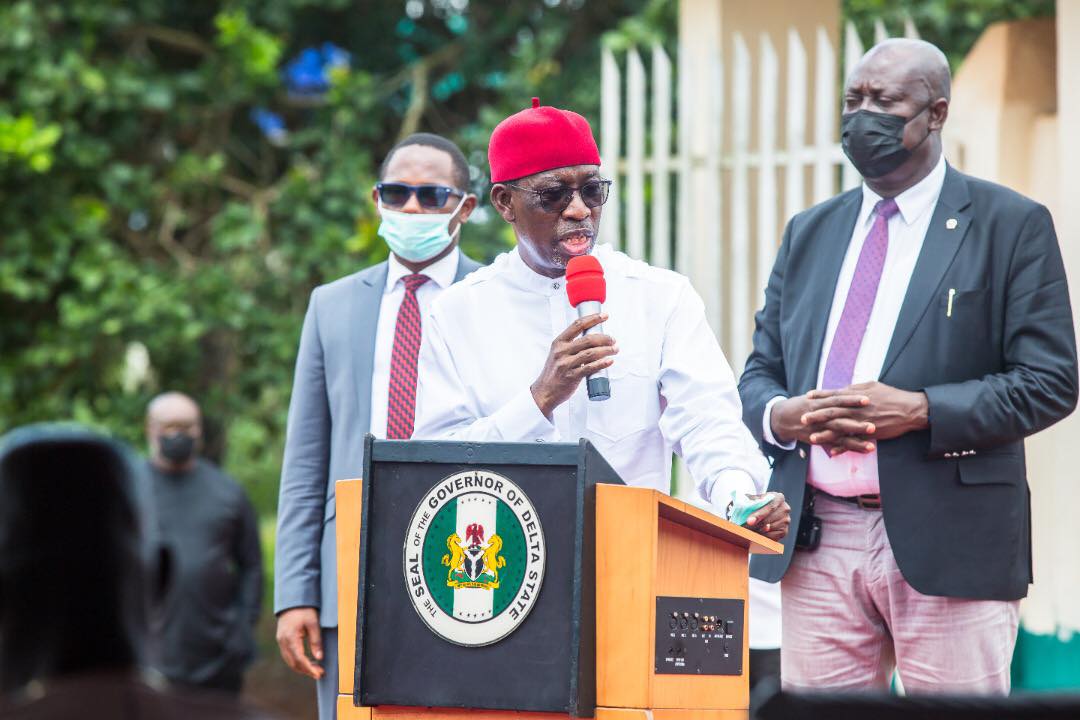 Delta Governor, Sen. (Dr) Ifeanyi Okowa, on Wednesday, said College of Medicine of University of Delta, Agbor, would be sited at Agbor, not Owa-Alero as being speculated in some quarters of the state.

Okowa made the clarification when he led the former Governor of Cross River, Senator Liyel Imoke, to inaugurate the reconstructed 10.2-kilometre Alihame/Agbor-Nta/Oki road and side drains in Agbor, and Abavo Circular Road Phase II and III, Abavo, both in Ika South Local Government Area, saying there was no iota of truth in the speculation.

He disclosed that the Trauma Centre being built by the state government in Agbor and the Agbor Specialist Hospital would serve as Faculty of Medicine of the University, adding that paperwork and the design for the medical school, which would be sited close to the defunct College of Education, Agbor, was already being prepared.

He said that the land for the medical school had been assessed and acquired, and deplored rumour-bearing in matters of governance.

The governor said that his administration attached great premium to education hence it had been building new and rehabilitating primary and secondary school, technical schools as well as tertiary and health institutions.

“We are already designing the faculty building of the medical school and the council is aware that I have gone on inspection of the site around the former College of Education, Agbor.

“I needed to correct this because of the rumours making the rounds,” he stated.

On the road, he said “this is a federal road that connects Agbor, Warri to Benin Expressway and I am glad that the road has now been fully completed and you can now move freely to Benin without any hitch.

“We have also just come from Abavo where we inaugurated the phases II and III of its circular road, which were in deplorable states for many years. With the roads, movement and transportation in this area will be enhanced.”

Inaugurating the roads, Imoke said that Governor Okowa was the pride of the Peoples Democratic Party (PDP) and a great leader celebrated by the party, especially in the South-South.

He commended the governor for his humility and outstanding accomplishments in Delta, saying “Okowa is one governor that we all celebrate and it’s a great honour and privilege to be invited by a man that we all admire as a great leader.]

“We respect him for his humility, integrity, God-fearing governor and silent performer, and I believe that Nigeria needs people like Ifeanyi Okowa.

“I have worked with him over the years and I have found out that we have produced a good leader not just for Deltans but Nigerians and I believe that he has more to offer Nigerians.

“He has brought significant transformation, grassroots development and economic opportunities for the people of the impacted communities.

“Unfortunately we don’t have this type of leadership in many other states; what you have there are flamboyant leaders that don’t listen to the people.’’

Imoke said that Okowa was the “glue” that held the South-South together, and urged people of Delta to continue to celebrate him, adding that the governor was also “the one person that has made PDP to stand the way it is today in the country’’.

“One of the greatest decisions Secondus made was to allow Okowa to chair the Convention Committee and we have seen that leadership play out beyond Delta State,” he added.

Permanent Secretary, Ministry of Works, Mr Felix Edafioghor, commended the governor for his determination to build and reconstruct roads in the state.

on his part, Chairman, Ika South Local Government Area, Mr Sunny Tatabuzuogu, expressed gratitude of people of the area to the governor “for his passion to develop the area and other parts of the state”.