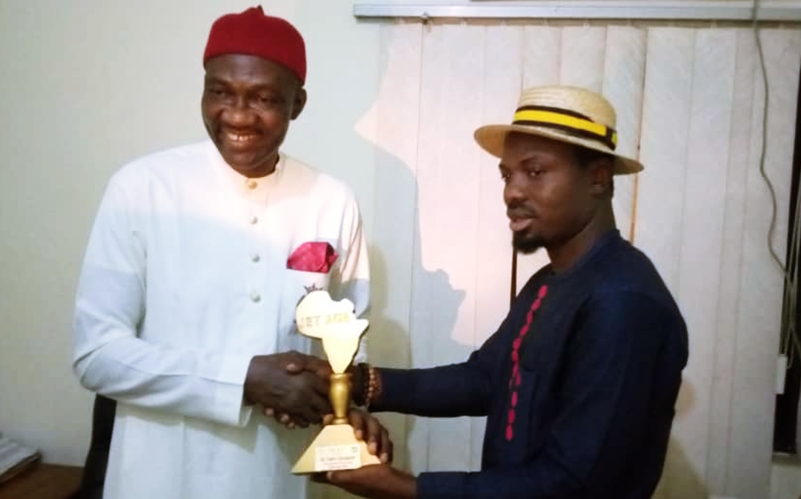 The Continental Coordinator, Amb. Young Piero Omatseye, who presented the award on behalf of the  Face of Jet Age Nation Builder and Brand Ambassadors India-Rwanda, Amb. Nayasa Sanghavi, said from the three nominations they got from Nigeria for the Jet age Continental Award, Dr. Cairo Ojougboh, the Executive Director of Projects, NDDC is one of them.

Describing the Jet Age Nation Builder as an institution which takes synergy with like minds across Africa and globally in partnership with the United Nation Development Programmes, the Africa Union, the common wealth, captains of industries, world youth organizations, Amb. Omatseye said; “The Jet Age was borne out of the steering committee that we had in 2019 were we found out that we really need individuals to drive processes of zero tolerance to corruption like Rwanda and we came to Delta State with all our stakeholders around.

“People were nominated because of the tireless works they did in their countries and Dr. Cairo Ojougboh fell into this category as a Distinguished Personality of Jet Age, a new Face of NDDC. When we traced the works of Dr. Cairo Ojougboh and his activities in the Niger Delta Development Commission during our investigation, we found out that Dr. Cairo Ojougboh is very transparent in his works as the Acting Executive Director of projects NDDC. With the top secrets that he has leaked from the NDDC, we believed that this is worth emulating at all point and this is in alliance with transparency international.

“We also found out that Executive Director of Projects, was able to leak the mismanaged funds of the commission to the tune of about N1, 447, 750,766,66 in just three years not accounted for. Where is this money? We further checked on his profile to know where he is coming from and we found out that he has a clean slate.

“The Jet Age Nation Builders therefore call on the international communities, human rights agencies to support this Interim Management Committee of the NDDC to make sure they deliver in their promises.”

Earlier, the Executive Director of Projects NDDC, Dr. Cairo Ojougboh while receiving the award, thanked the Jet Age Nation Builders’ Organization for bestowing on him a Distinguished Personality and New Face of NDDC.

He said; “I am most delighted to be so recognized because this award is coming from a country like Rwanda with very impressive record of anti-corruption efforts, a country that is zero tolerance for corruption as number one in Africa in making progress. As a Soldier of truth and National Patron of Soldiers for Truth International Advocacy, I want to say that that no man is hated as much as one who tells the truth; but once you imbibe the spirit of the truth then you will be free. Therefore I am glad that people realize we are telling the truth.”

“On NDDC, the information coming from my table indicates that with three years, about N1.4trilion of emergency contracts, contracts not captured in the NDDC budget and they were mis-accounted and this has caused a lot of problems in the Commission because there is nothing on the ground to show. So, we have started the first phase of the forensic audit which is verification of jobs both ongoing and completed and have gotten a certificate of no objection to appoint a lead Auditor and probably take off the forensic. A lot of people are against the verification and forensic audit because of their selfish interest.

“But we have the courage to face it and if this is the only thing we can do for Nation, it’s enough. We will completely clean NDDC so that an incoming Board will follow the standard, the benefit of the creation of NDDC will be felt by the people of the Niger Delta because the NDDC is supposed to be a vehicle for transforming the Niger Delta and for recognizing and compensating the pains of the rural areas but over the years we have nothing to show for it.

“For instance the Head quarters of NDDC has been ongoing for 30 years from Oil Mineral Producing Areas Development Commission (OMPDEC) but since we came the construction has gone far and may be ready for commissioning by the end of March 2020. So we have decided that we are not going to to award mega projects but to complete what we have already on ground.” Ojougboh added.