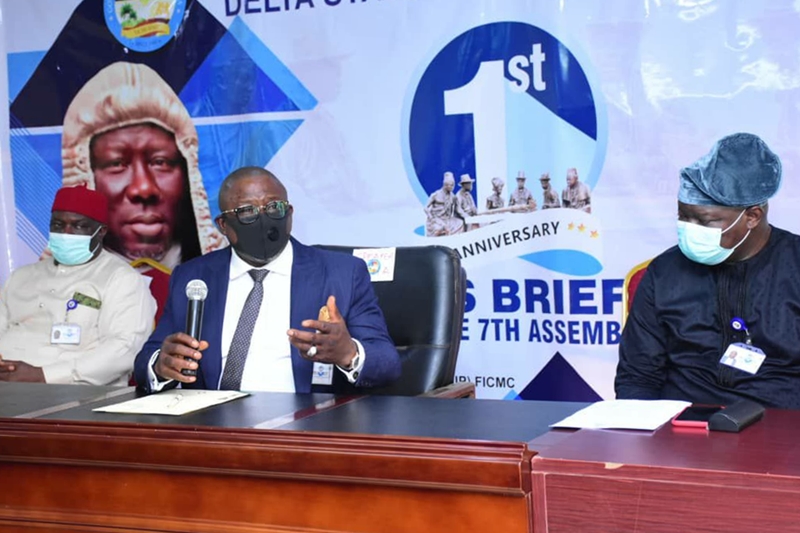 The Speaker, Delta State House of Assembly, Rt Hon Sheriff Oborevwori and Deputy Speaker, Rt Hon Ochor Christopher Ochor, have mourned the demise of the Majority Leader of the House, Hon Tim Kome Owhefere (TKO) who passed on after a brief illness at 57.

In their separate statements on the sad event, the duo described the departed lawmaker as a beacon of legislative activities in Delta State.

The Speaker in his statement said, “It is with heavy heart that I received the shocking and devastating news of the sudden passing of the Majority Leader of the Delta State House of Assembly, Hon Tim Kome Owhefere KSC, on Wednesday 27th January, 2021. I am broken by his demise.

“While I commiserate with the wife, children, family, friends and associates, I have lost a dependable colleague, quintessential lawmaker and a friend. Again, my heart goes out to the Isoko nation for this huge loss.

“My colleague, Hon Owhefere died when his vast and expansive legislative experiences were most needed. He has left a vacuum that will be difficult to fill. While I take solace in the works and memorable moments we spent together as fellow lawmakers, I will forever remember his commitment to duties and loyalty to friendship.

“No doubt, this is a difficult moment for his constituents- Isoko North State Constituency. We should endeavour to keep his laudable achievements alive rather than question the circumstances of his death. It is an act of God painfully though but cannot be questioned.  Adieu Majority Leader of our times!”

The Deputy Speaker in his statement titled, “Goodbye To A Colleague, My Sitting Partner- Hon Sir Tim Owhefere, Esq.”, said that the demise is a big blow to legislative advancement of the state, noting that, the late Owhefere was  a strong pillar to the unity, peace and legislative work of the House.

Ochor wrote, “So Shocking, and, So Painful as Sorrow fills our Hearts this critical moment. A sorrow so deep, has silently closed the door of life from us. The death of our Majority Leader in the Delta State House of Assembly, Hon Tim Kome Owhefere, Ksc, Esq., my sitting partner, inspirator and confidant, on Wednesday, January 27, 2021 is really devastating.

“His demise is a big blow to legislative advancement of the state, he was a strong pillar to the unity, peace and legislative work of the House. A legislator par excellence who will be missed by us all members, of the Assembly and those who had met him, and worked with him all these years.

“At plenary, he always display his sagacious and mastery of affairs of legislative operations. His jokes to calm nerves, and his great leadership roles towards members was exceptionally admiring.

“Rich in Style, Highly Dependable, filled with Experiences, always on Duty, Commander of Legislators, and if there is a bigger tree than the Iroko, he was that tree in the legislative business.

“Major” left when a lot was expected of him, but what right have we to question the Almighty.

“I condole with the family, and the entire people of Isoko North State Constituency, and my Honourable Colleagues, asking that his legacy should be preserved and not be wished away. Good Night, My Able and Sagacious Major!”