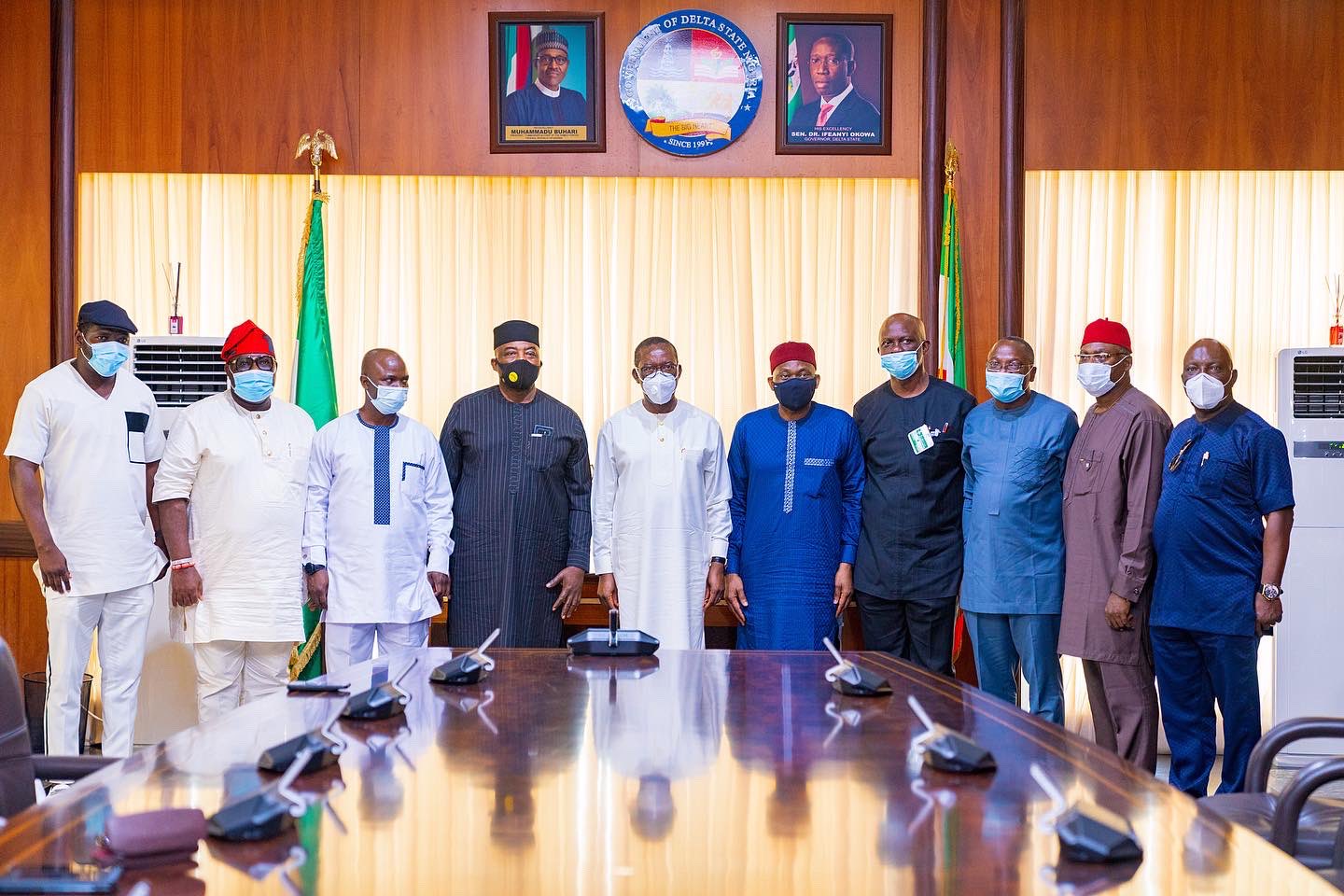 The Delta Caucus of the House of Representatives on Wednesday, October 28, 2020 paid a solidarity visit to the Governor of Delta State, Senator Dr. Ifeanyi Okowa, to commiserate with him over the wanton destruction in the State during the ENDSARS Protest.

The Minority leader of the House of Representatives, Hon. Ndudi Elumelu led the delegation on the visit to Government House, Asaba.

Receiving the Caucus, Senator (Dr) Ifeanyi Okowa, thanked the lawmakers for the visit and for always identifying with the state government and the people in difficult times, recalling that the caucus took similar step two times during the critical period of the COVID-19 pandemic in the state.

The Governor, reaffirmed his administration’s readiness to partner youths in the state to improve on governance and its structures and said the government would ensure that regular communication with the youths existed to prevent misinformation which could lead to further break down of law and order.

Okowa appealed to the youths to continue to assist the government and security agencies to ensure that criminal elements in the society were not allowed to succeed in their acts.

Delta Governor, Senator Dr. Ifeanyi Okowa (Left) and Minority Leader, Federal House of Representatives, Rt. Hon. Ndudi Elumelu (Right) during a solidarity visit by members of Delta caucus in the Federal House of Representatives to the Governor in Asaba over destruction of public infrastructure during the EndSARS Protest on Wednesday, October 28, 2020

“I truly must be very thankful to you for this visit and the show of love for your dear state, Delta, because I recall that this year alone, this is the third time you are coming as a group of National Assembly members to come to be with us at the moment of difficulty.

“Twice you came when we had issues concerning the COVID-19 infections and today, you are here again. I truly must let you know that I appreciate you very greatly because you feel for your people and you are concerned about the things that take place in Delta State.

“I must commend the unity among you as a team in NASS and that is also very important for us as a state – that our own are united and it is possible for you to speak for us with one voice and to ensure that what is due to Delta State comes to Delta,’’ he said.

He said that the state had, after COVID-19 challenges, been contending with issues associated with flooding in some areas before the ENDSARS protests set in.

The governor said that the protests were peaceful and that the state government gave a voice to it because it believed that the youths who set out to conduct the protest had a reason and their voice needed to be listened to.

“Here in Delta State, we notice on Tuesday, that there were infiltrations from outside the state into the #ENDSARS protesters and we did draw the attention of their influencers to watch very closely, because their protest was gradually being hijacked.

“On Wednesday, that was also noticed and the crisis had started in Lagos,” he said, and however, commended security agencies for their professionalism in tackling the crisis in Delta.

According to him, it was a very difficult situation to manage, but today we thank God that we have been able to manage it. Unfortunately few people lost their lives – one in the Warri area who was knocked down by a truck, obviously not from the police, and one person in Sapele.

“Another ugly incident that would have taken place was the issue of palliative-looting, but luckily that was managed because there was nothing to loot.

“The CA-COVID items were delivered to us in September, and soon as it was launched, we ensured that within two weeks it was distributed to all 270 wards of the state.

“It was specifically meant for the very indigent in every ward; so, 179 families in every ward received the items as specified by CA-COVID and every single thing has been distributed.

“A large crowd gathered around the Event Centre, but we opened it for them to see that it was empty. So, we thank God for that,’’ Okowa said.

He commended community youths in the state for their commitment towards preventing further destruction across the state, and disclosed that he would have town hall meetings in Warri with a select group of youths and also in Asaba.

He explained that the meeting would provide a platform for the government “to talk with some of our youths, continue to engage them, continue to make them understand that working together in partnership, we can improve the governance structure.

“I want to specifically thank you people for this visit and to thank you especially for the promise that you have made in the repairs of the High Court building.

“That is actually paying back to the society and it is only God that can replenish this which is coming out of your pockets.

“I thank you and wish to appreciate this visit, and I am sure that all Deltans do appreciate your concern and we pray that God will continue to enable you to perform your duties to the admiration of your constituents.”

Earlier, the Minority Leader of the House of Representatives, Hon. Ndudi Elumelu had told the governor that the lawmakers were on a solidarity visit to him to empathise with him and the people of the state over the unfortunate destruction of public buildings by hoodlums during the #ENDSARS protests.

He announced the donation of N150 million by members of the caucus to support the re-building of the burnt High Court in Asaba.

The Caucus also visited the Chief Judge of the state, Justice Marshal Umukoro, over the unfortunate incident.

Receiving them in his office, Umukoro thanked the legislators for the visit, adding that the state’s Judiciary was grateful for their solidarity.

He said the destruction and vandalism on the court building, which was recently rehabilitated and equipped, had set the state back by 28 years.

High point of the visit was an inspection tour of all the destroyed structures in Asaba.