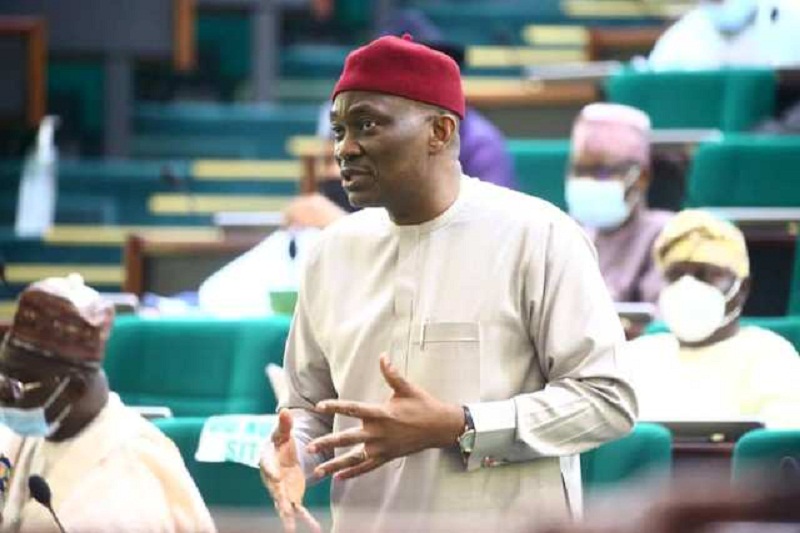 Since his inauguration into the 9th National Assembly about two years ago, as Member representing Aniocha/Oshimili Federal Constituency, Rt. Hon. Ndudi Elumelu, has continued to demonstrate his love and passion for the people, which to him is the basis for representative democracy at any level.

His belief and commitment to the people is exceptional, inspiring and assuring; bringing to bear the age-long definition of democracy as the government of the people for the people in the social contract he entered with his people.

Indeed, like he noted in his speech on Saturday 15th May, 2021, during one of his empowerment programmes at Asaba, Rt. Hon. Ndudi Elumelu insisted that the people remain the focal point in all of his activities and actions in the National Assembly.

“With all sense of responsibility, I have been committed to empowering, developing and uplifting the living standard of our people through robust representation,” Rt. Hon. Elumelu stated in his speech that day and that is not by anyway far from the truth.

All his struggles, his contacts, his motions and bills moved at the floor of the Green chamber, his cordial relationship with his colleagues at the two chambers of the National Assembly as well as the executive arm of the Federal Government are geared towards empowerment of his people.

Just after his inauguration as the Minority Leader of the House of Representatives, Rt. Hon. Elumelu opened the floodgate of his passion for the people when in September 2019, he facilitated the training of over 200 budding entrepreneurs from the Four Local Government Areas that comprises the Aniocha/ Oshimili Federal Constituency of Delta state.

The training by the Small and Medium Enterprises Development Agency of Nigeria (SMEDAN) conferred certificates to participants which guaranteed each of them a low interest CBN loan up to the tune of N10 million without collateral.

One month later, on Friday October 25, 2019, Rt. Hon. Elumelu, directly employed 150 members of his constituency as Personal Assistants on youths and women affairs with monthly salary and other allowances for the period he remains the representative of the people in the House of Representative.

Rt. Hon. Elumelu, in keeping with his social contract with his people has been able to also influence verifiable projects that have directly impacted on the wellbeing of his people in Aniocha Oshimili Federal Constituency.

These projects and initiatives include:

* Facilitation of vocational centers in Ubulu-Unor and Asaba

*Facilitation of the construction of drainage in Ogboli Road Ibusa

*Facilitation of the construction of the Onicha-uku-Idumuje-Unor Road.

*Construction of staff quarters are on-going at FMC Asaba Annex and will very soon be commissioned.

*Provision and installations of 820 stands of solar street lights which were distributed across communities in the four local government Areas within Aniocha/Oshimili Federal Constituency.

Again, Rt. Hon. Elumelu in line with the needs of the people, facilitated the employment of over 40 members of his constituency in different federal ministries, agencies and parastatals as well as recommended over 200 candidates for employment thereby attesting to his cordial relationship with the executive arm of government.

Not relenting in his drive in empowering the people, Rt. Hon. Elumelu again in November, 2020, organized a capacity training programme for over 200 youth and women in rice and cassava production.

At the end of the five-day capacity training programme which was held in Asaba the beneficiaries were given starter packs to enable them commence their own cassava and rice farms.

Rt. Hon. Elumelu demonstrated his love, compassion and commitment to the people during the lockdown occasioned by the global Covid-19 pandemic, when he mobilized over N100 million naira, which was used to provide comprehensive palliatives to the people of Aniocha Oshimili thereby reducing the negative impact of the lockdown.

This is apart, from his massive sensitisation of the people on the mass media, on the need for them to adhere strictly to all protocols on Covid-19, while facilitating CBN sponsored monetary empowerment programmes for them.

In his determination to help ensure efficient leadership for the government at the grassroot level, Rt. Hon. Elumelu sponsored a four-day capacity building training for local government chairmen, their deputies and 80 councillors from his Federal Constituency in Abuja.

Still making the people the center of his representation, Rt. Hon. Ndudi Elumelu, on Saturday 15th May, 2021, again, gathered his constituents in a well-organized ceremony, where he empowered a total number of 456 members of his constituency with items worth over N300 million.

The ceremony which was attended by the Delta State Governor, Senator Dr. Ifeanyi Author Okowa, witnessed the presentation of 107 tricycles, 148 motor cycles, 90 deep freezers and 111 electricity generating sets to these 456 members of his constituency.

Speaking at the event, Hon. Elumelu noted that, “the idea is to make the beneficiaries small business owners who will eventually help in creating jobs and reducing poverty in their immediate communities.”

“I urge the beneficiaries to be passionate in putting these items into proper use and to see this as an opportunity to climb to an enviable level of prosperity which is before you today”, he said.

Speaking in an exclusive interview, a renowned political leader in Delta State, Dame Nkem Okwuofu, who is also the Chairman of the Rt. Hon. Ndudi Elumelu Empowerment Programmes Committee, commended the lawmaker for his effort.

Dame Okwuofu also explained the criteria for the selection of the 456 beneficiaries in the May 2021 Empowerment programme, noting that the beneficiaries were selected on the bases of the fact that they are constituents of the Rt. Hon. Elumelu.

She also affirmed that the people who benefited are those on the poverty ladder and still part of the lower status in the society irrespective of the fact that they are party officials at the grassroots. She also dispelled the insinuations that well-to-do leaders were given the empowerment items instead of the downtrodden in the society.

Dame Okwuofu, who is a member of the National Executive Committee of the PDP and the Chairman of Delta State Civil Service Commission, affirmed renowned leaders of the Federal Constituency were carried along by way of presenting the empowerment items to them for onward presentation to indigent constituents. She explained that none of such leaders were given the items for their personnel use.

“It will be unfair to say that Rt. Hon. Elumelu empowered the top people, instead of the lowly. This is because they don’t know the criteria. As Dame Nkem Okwuofu, I cannot today go and start driving motorcycle, neither can I go and start driving Keke. Because of the fundamentals and of Ndudi’s intent to reach out to the grassroots, things were also done in that way by going through our leaders to get the empowerment items to the downtrodden.

“The criteria that was used was to the best interest of the people and our party. However, in whatever you do, you don’t expect everybody to be satisfied. Some persons must complain and unfortunately some of the complaints we get came from the higher ups who are being accused now of having taken everything.

“Now we started from the lowest ward chairman, all ward chairmen, of course you know, there is no big person among them, the ward chairmen, I mean with all due respect to them they are big men in their own way, but the type of big men they are referring to now is these people at the grassroots who are ward chairmen, and they are not big men.

“So, this one is not the end; it is a continuous process. I just want to urge them to be patient with us and with our beloved son, Rt. Hon. Elumelu. He means well for the people. In other words, if any one has any observation to make, let the person make it and it should be noted. In the next one, the person who has not been given will be considered.

“But what do we owe him? We owe him prayers and we owe him encouragement, Dame Okwuofu explained.

Okwuofu also stressed that the gesture by the Minority leader is not politically motivated but borne out of the passion for the people.

“Whatever, Rt. Hon. Elumelu did, he has done it to empower members of his constituency. Whatever translations anybody gives, the challenge will be for the person to go back there and do better than Ndudi Elumelu,” the renowned political leader stated.

She also called on the people to continue to support the Governor Ifeanyi Okowa’s led administration in Delta State as well as remain steadfast in the PDP.

“I have been telling him openly and secretly that he is not pleasing people, he should please his God. He should always pray and listen to the voice of God before doing anything. Insinuation will come, but please don’t let that dampened your spirit, and let people know that you have your help in your God. When you do that, you overcome every other thing the world.”

Dame Okwuofu urged Hon. Elumelu not to be deterred but continue in protecting the interest of his constituents as well as his programmes to uplift their living standard in all spheres of life.