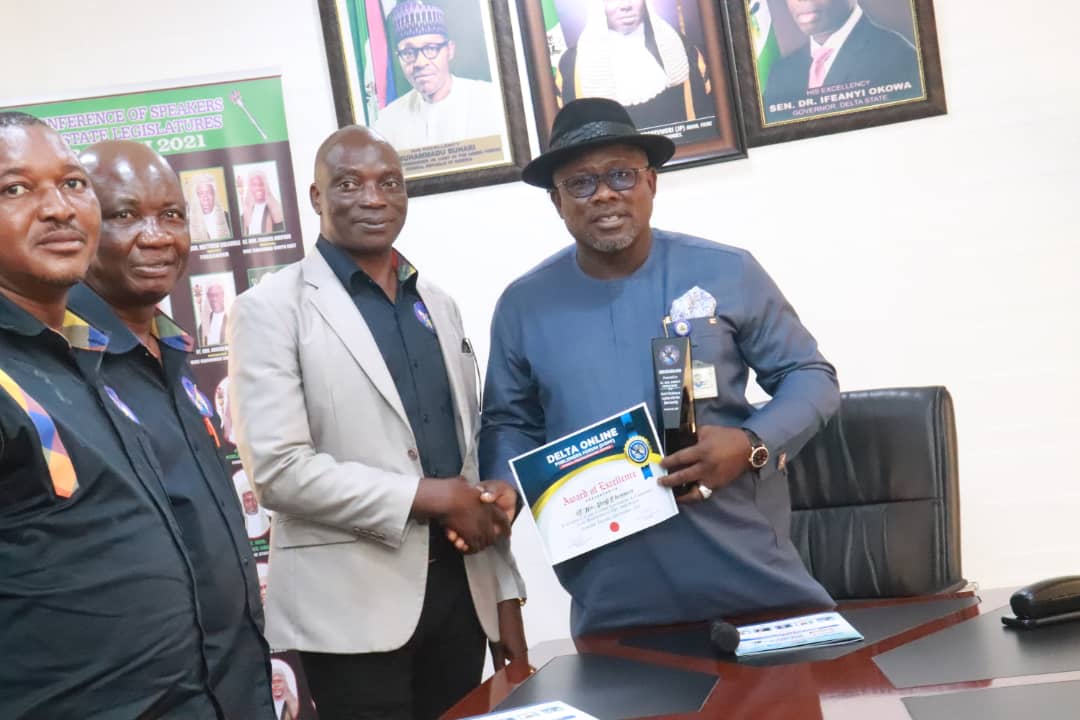 The Speaker of the Delta State House of Assembly, Rt. Hon. Sheriff Oborevwori, has been commended by members of the Delta Online Publishers Forum (DOPF), for his longtime association with the forum, especially at its formative stage.

The commendation was given on Tuesday, November 23, 2021 when the Forum formerly presented ‘The Legislator of the Year Award’ (State) bestowed on the Speaker at the Forum’s 2021 Annual Lecture/Niger Delta Media Hall of Fame Induction and Awards.

Presenting the award to the Speaker who also represents Okpe State Constituency in the State House of Assembly Complex, the Chairman of DOPF and leader of the delegation, Mr Emmanuel Enebeli, while congratulating him on his recent award of excellence presented to him by the Daily Independent Newspaper, as Lawmaker of the year and Independent Nigerian Parliamentarian of the year, stated that the Forum found the lawmaker worthy of the award following the delivery of key projects to his constituents and the way he has been leading and managing the affairs of the State Assembly and being the longest serving Speaker in the history of the State.

According to Enebeli, who disclosed that the humble number of registered members of DOPF was a deliberate strategy to prevent the Forum from being a place for all comers, and to insulate the group against the activities of quacks in the profession of journalism, emphasizing that the present DOPF leadership was determined to ensure sanity in online journalism and publishing in the Niger Delta Region and Nigeria in General.

He pointed out that the award was in recognition of Oborevwori’s efforts to his constituents and the State Assembly in terms of quality leadership, outstanding performance and delivery of dividends of democracy.

These projects and performances include; passage of development and legacy bills namely, the financial autonomy bills for the State legislature and judiciary, establishment bills of three (3) new universities in Delta State; massive facelift of the Assembly complex and legislator’s quarters, leading a peaceful and robust legislature amongst others

Thanking the Forum for deeming it fit to honour him with an award of excellence as the legislature of the year, Rt. Hon. Sheriff Oborevwori disclosed that he has been avoiding and turning many awards down but the credibility and importance of DOPF made him to accept it, saying that he could not attend the Annual Convention of the Forum because it collided with the date and time the State House of Assembly received the 2022 proposed budget from the Governor of the State, Senator Dr. Ifeanyi Okowa.

While dedicating the award to God Almighty and to his colleagues, Oborevwori commended members of DOPF for their dedication to the ethics of journalism profession and noted that it’s the duty of the Online Publishers to rid itself of bad eggs.

“Please continue to do the right thing at all time. Stand against blackmail” The Speaker added.