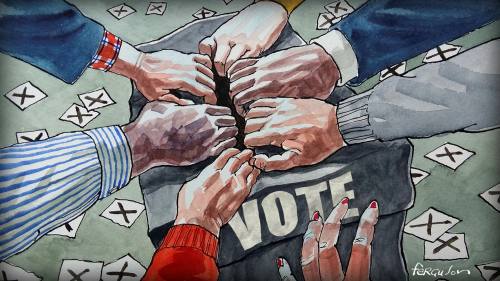 The National Assembly has passed an amendment to the electoral law directing political parties to mandatorily take the direct primaries option to choose candidates for elections. It is a good step for the expansion of democratic practices within the political parties.

The meltdown in the PDP in the past sixteen years was caused largely by the refusal of it’s hierarchy to democratize it’s internal processes, practices and institutions. The party’s internal machinery was hijacked by the first generation of electoral victors who thereafter held strongly to party structures and choosing later to hand over only to their own anointed party men. The governor’s of the PDP became too powerful and considered themselves owners of the party.

The party was thus held under a tight leash and control of self aggrandizing influence peddlers and their cronies who did well to keep other members considered to be ambitious out.

Personal advancement in the party was earned through loyalty to men rather than to the party and only as favors from these party men of influence. Candidacy for elections and appointments to government offices were won through shameful expressions and effusions of loyalty to these modern deities in the PDP.

PDP by this widespread practice made a caricature of modern democracy and it was a uniquely twisted and frustrating Nigerian experience. People who thrived from it wanted to keep the practice but the mass of party men and women whose progress have been shot down by the unprogressive practice are happy that it has been brought down.

This jaded and suffocating practice eroded internal democratic progress in the PDP, prompting the constant defection of party men and women, including a former vice president, to other parties. This new amendment to the electoral law offers PDP a chance for a rebirth and renewal as it will help in reworking itself and expanding possibilities for it’s members. But members must work hard and be hopeful that the old gang of influence peddlers will be faded out and leave without their debilitating influence in the new arrangement.

The entrenched influence peddlers in PDP would not hear of this possible loss of power however. They have already registered their disavowal of the new law. They are the ones who have, through their determination to hold on to power and control the inner workings of the party, squeezed vibrancy, innovation and progressive thinking out of the party.

You hear PDP influencers talk so glibly about controlling the “party structure”. How can a man or group hope to control party structure in a direct primaries electoral system? Of what use will it be?

PDP had to go through self immolation but it did not learn from its own death nor does it now understand fully, the emerging political reality arising from direct electoral primaries. It’s elite have been hoping to bring back yesterday without realizing that new dawn’s break everyday. PDP will go through difficult rebirth to remain relevant in the emerging direct primaries electoral system.

PDP remains the more preferred progressive party. It is the self serving and unyielding connivance of it’s influencers and political office holders that has cast it into the conservative mold. And also because it has never had an imaginative and proactive media team. It’s media handlers have been lethargic and reactive and was harassed to submission by the more savvy and aggressive media team of the APC since 2014.

APC is the true conservative party in Nigeria but it still holds the mainstream media under its leash. And it is still buying.

A political party dominated by a carpet bagger like Bola Tinubu and led by a man from an underachieving civilization like Muhammadu Buhari cannot but be a conservative party, holding on to yesterday’s jaded values for self preservation.

APC cannot be described as financially conservative in the mold of the American Republican Party or a grappler for traditions in the Conservative Party matrix of Britain. APC is an informal gathering of political drifters banding together to seize power by any means available.

It is not shamed by a lack of a unifying thought guiding its formation neither is it handicapped by an evident absence of a guiding ideology. It was formed for the sole purpose of a power grab. The thoughts on governance came after the success of the power grab. But then the country was left adrift as the toxic and exhilarating influence of money and power polluted the party and inebriated it’s top office holders. And then we all suffered.

PDP will hopefully rise through its hard experiences to its former place of pride in national politics, if Nigeria does remain one. But it must first learn to shorn itself of the destructive practices of former and present office holders and other influencers by submitting the party to the rule of the people through direct selection of candidates for election known as direct primaries. That is essential democracy. It will offer the party a chance for purification and renewal and a rebirth to true democracy.

APC may have promoted this bill to hurt the PDP but the PDP must see through this gambit and use the chance to rebuild itself. What was conceived to hurt the PDP may actually help the PDP to find it’s lost soul.

Beyond party politics, APC conceived this new strategy to play to its supposed northern regional strength in the presidential election. In a direct primaries system total scores of candidates from each state is tallied and the highest score from a total of the states is declared winner. APC hopes to bring in the bloated and rigged population figures from the northern region to play in the direct primaries of the presidential election.

Remember in 1991 when Shehu Musa Yar’adua swept the votes in the SDP presidential direct primaries before the evil one, Ibrahim Babangida canceled the process yet again? That is what the North wants to re-enact. In the face of the strong challenge from the South and the Middle Belt, the old foxes of Northern politics dusted up their old play books.

This is the reason Atiku seemingly agreed to step down in the PDP primaries. Now he will be in, again.

But the true story of Atiku’s presidential election withdrawal has still not been told. No, not yet.

Delta Guber 2023- The PDP Albatross: Against APC An Urhobo Candidate Will Be A Cheap Concession
OPINION: A Criminal Enterprise Called BEDC
Advertisement