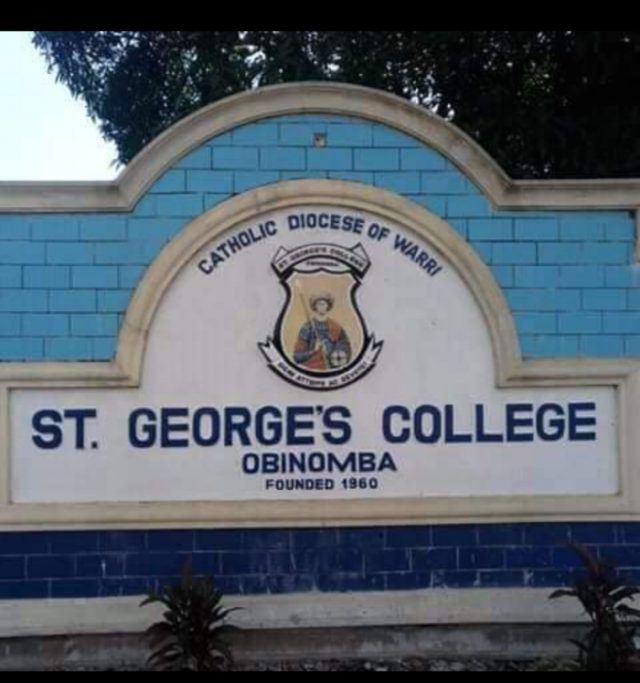 The National Executive and Members of St. George’s College Obinomba, in Ukwuani Local Government Area of Delta State, Old Boys Association (SAGOBA) have resolved not to relent in their collective decision and wishes to make their alma mater, a centre of academic excellence in Nigeria.

This was disclosed at a Press Briefing in Asaba to let the world know of the celebration of the School’s Diamond Jubilee and afoot plans to launch several projects among which is the launching of e-Library and N100million appeal fund.

Speaking to journalists, the SAGOBA National President, Engr. Cosmos Nwanwene, who led his exco and other members at the press briefing said, “we are celebrating because the school changed our lives, modelled us and built great men. We the Old Boys want the coming generation to enjoy what we felt when we were there”.

Adding, he said “The College was a Catholic School that model’s one for academic excellence but was later changed to Government College be returning back to Catholic and within this period, lots of things went wrong including infrastructural development. Classes used to open as early as 7:30am which has changed but the Old Boys are working hard to revert to the old standard ways. We have reroofed the Hall, fencing is ongoing and many other things.

The National Executive and Members of St. George’s College Obinomba

Also speaking, Chief Onyemesi Gabriel, who disclosed that the Old Boys solely built an ICT Center that’s not obsolete both in size, lamented that St, George’s College Obinomba no longer look as it used to when they were there which was one of the reasons the Alumni Association took it as a challenge to make sure the infrastructural facilities as well as academic standard restored.

Commenting, the Principal of Saint George’s College, Revd Harrison Egwuonu noted that the School is worthy of celebrating having produced great men who are nation-builders and whose achievements are groundbreaking in every sphere of life. Adding, he said “the school is a missionary school that passed many stages we are now celebrating the 60th Anniversary”.

Some of the college’s products are Philip Emeagwali, a computer scientist, known for inventing the world fastest computer, the nation’s current Deputy President of the Senate, His Excellency, Senator Ovie Omo-Agege, among others.