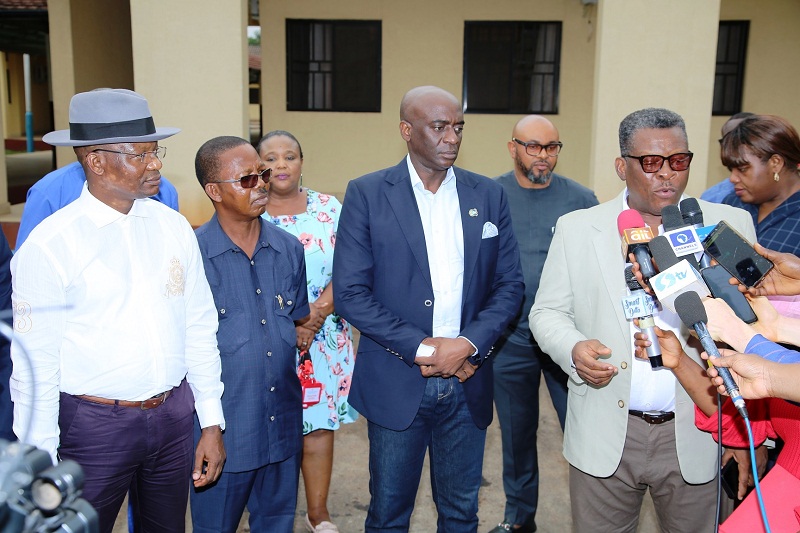 There is a cold war between nurses in Delta state and the state commissioner for health, Dr. Ononye Mordi. Our discreet investigation reveals that the ministry of health is surreptitiously selling forms to train community nurses and midwives against the wishes of the National Association of Nigeria Nurses and Midwives of Delta state council.

Allowances for rural and riverine community nurses and midwives were reportedly stopped in October 2019 by the state ministry of health. The stoppage followed the claim that there are no rural and riverine communities in the state. Our investigation revealed that though the ministry has allegedly claimed that there are no rural communities in the state, the ministry has begun the process of selling forms to train community nurses and midwives for the local government health centres.

Although the programme is an initiative of the Nursing and Midwifery Council of Nigeria, nurses in Delta state are opposed to the move, citing poor infrastructure in the institutions to accommodate the students for the training, inadequate manpower, the over 1500 nurses and midwives already trained but have not been employed, the government’s claim of no rural areas in the state and the fact that the graduates from the programme will be quacks and will pose health risks to the communities they will be exposed to.

A copy of the introductory letter from the Nursing and Midwifery Council of Nigeria sent to the office of the commissioner for health and obtained by our reporter, stated that the programme is to strengthen the nursing human resources at the primary health care level and reduction of maternal and infant mortality in Nigeria.

The first page of the letter reads as follows: “The council is aware of the gross shortage of human resources for health at the community level, occasioned by mass migration of nurses to urban areas and other countries with resultant weakening of the primary health care system and poor access to health care by rural dwellers in the country.

“In Nigeria, there is currently a great demand for nursing care to be accessible to children, adolescents, adults, older people, vulnerable groups, victims of crime and disasters, and internally displaced persons in their own communities and settlements.

“In order to close this gap and to further accelerate the achievement of the health related sustainable development goals targets and universal health coverage in Nigeria, the council is introducing community nursing programme to meet the health care needs of the rural and hard to reach areas.

“The programme is designed to produce competent lower cadre nursing practitioners who would be at the forefront to implement nursing and health care services at the grassroots towards meeting the health care needs of the rural and hard to reach communities in Nigeria.” This was signed by chairman of the nursing council, Dr. Mrs. Abosede Bola Ofi and secretary general, Alhaji Farouk Umar Abubakar.

However, Emerald News learnt that there are over 1000 graduate nurses who have not been employed and engaged for nursing jobs in the state. Our bewildered sources who are uncomfortable with the move are now saying: “They want to train community nurses and midwives whereas there are graduate nurses already on ground, trained and prepared for the job. Why not employ them instead of training new ones?”

Our investigation further revealed that nurses and midwives were recruited last in the local government areas in 2004, a total of over 16 years between 2004 and 2020. One may now wonder how are the health centres in the communities coping with expected mass shortage of manpower. And from 2004 till date, no graduate nurse has been employed for the local government councils whereas nurses are being churned out of nursing and midwifery schools annually.

Our findings show that the programme being proposed by the ministry of health will run for two years with O’level certificate as qualification for entrance. It was also revealed that forms for the admission are allegedly being sold for N10,000 for each applicant. Available facts revealed that these prospective trainees will not have career prospect in the state civil service but will only be employable at the community level. Our sources described the recruitment status as akin to casualization. Labour laws have, over the years, abolished casualization in the civil service.

It was, however, learnt that the motive for the ministry of health keying into the programme which Delta state should not key into because it is not in the category of states that have shortage of nurses and midwives is the financial benefit that will be derived from the entire process. Parts of the financial benefits include but not limited to examination fees, sales of forms, sales of past question papers and others.

Further revelation emerged that the schools which they have planned to use for the training have no seats, no enough tutors and no facilities for the students. It was further learnt that accreditation team from the Nursing and Midwifery Council of Nigeria had earlier pegged the number of nursing graduates from each of the three nursing schools in Agbor, Warri and Eku at 75 annually while 50 from each of the two schools of midwifery in Asaba and Sapele respectively.

The accreditation team also included 75 from Delta State University, Abraka making a total of 400 nursing and midwifery graduates from Delta state annually. Although the ministry of health, from facts available to us, had indicated graduating 100 from each of the nursing schools, the request was denied by the council following the non-availability of equipment and enough manpower in the schools.

But our investigation revealed that the state ministry of health is proposing to send 200 of the prospective students into each of the schools for the training, the same institution which the council had earlier denied 100 students. It was alleged that the ministry reportedly claimed that the push to go for the training emanated from the midwifery and nursing council.

But a copy of the letter from the council obtained by Emerald News states: “Kindly indicate your interest to participate in the programme to enable the council give you approval on admission quota based on physical and human resources capacity available in your institution.” This means the Nursing and Midwifery Council did not make the programme compulsory for the states. Sources within the health sector informed our reporter that out of the South-South and South East states, only Delta is participating in the programme.

Emerald News can authoritatively report that following the development in the state, nurses have signed an online petition to the National Council for Nurses and Midwives in Nigeria. Nurses in the state do not accept the training. The body of nurses is insisting that there are enough already trained and certified nurses and midwives in Delta state. Hence, if the state is in need of certified nurses, the association will provide qualified nurses for the government.

The nurses described the training as nauseating, a breeding ground for quacks who will, at the end, jeopardize the health of the people of Delta state. The body of nurses also noted that there are infrastructural deficit in the training institutions to accommodate all the students being proposed for the training.

The nurses believe that if the programme is allowed to run it will breed licensed but non-skilled midwives that will be more dangerous than quacks due to the license they will brandish, hence endangering the lives of their clients because of their level of competence. It is also believed that the products from these trainings will only be products for domestic use only in the local communities and cannot be employed by other governments agencies aside of local government councils in Delta state.

Arising from the above, the nurses in the state are demanding for the discontinuation of the community nursing and midwifery programme, advising rather that the state government should address the manpower shortage in the schools and local government by employing the qualified nurses and midwives on ground.

But commissioner for health, Dr. Mordi Ononye, in a short response to our request to have audience with him, said his decision to commence the training to the abandonment of the already graduated nurses and midwives in the state was approved by the Nursing and Midwifery Council of Nigeria. He called on the nurses crying over his decision to sheath their swords.

When contacted, Director of Nursing in the state ministry of health, Mrs. Mabel Ugbanaka, earlier told Emerald News to meet her in the office to talk on the issues raised but further calls made to her phone number were not picked. Calls were made to her phone for two successive days, she did not answer neither called back after seeing missed calls. And even four different messages sent to her phone on the subject matter went unreplied.

Also, permanent secretary of the ministry, Dr. Minie Oseji, denied knowledge of any of such training being undertaken by the ministry of health. She, however, directed Emerald News to the Public Relations Officer of the ministry, Donald Ojebo, who had earlier directed us to her for clarifications.