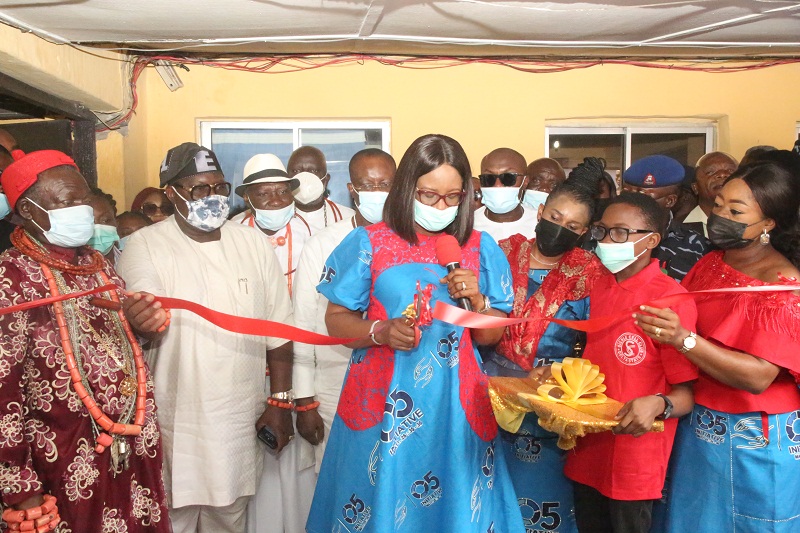 Wife of the Delta Governor and Founder O5 Initiative, Dame Edith Okowa has inaugurated the 16th Sickle Cell Clinic in the state.

The sickle cell clinic which is part of the O5 Initiative projects by Dame Okowa, is located at the Central Hospital Warri in Warri South Local Government Area of the state.

Unveiling the newly built health facility on Friday, July 30, 2021, Dame Okowa emphasized that the clinics being established across the state, have in no small way impacted Sickle Cell warriors and afforded them easy access to healthcare.

She disclosed that the Referral centre has recently added the Variant Newborn Screening Machine used for the determination of the genotype of newborn babies.

While reiterating a cardinal of O5 Initiative’s mission to cater for the Sick and vulnerable persons, she said, “I am grateful to God for giving us this vision and providing the resources to carry out our plans. We are not resting on our oars, God being our helper with the co-operation of Deltans, we will establish more clinics in the remaining Local government areas of the state.”

She commended the people of Warri South Local Government Area for their contributions towards the actualization of this project, saying, “It is indeed a privilege to establish the 16th Sickle Cell Clinic here in Warri, this is a dream come true. I am confident that healing will come speedily as the facility is put to use, it will to a large extent alleviate the sufferings of our warriors.”

She advocated for community support in the fight against Sickle Cell disorder saying that, it should not be left to parents, Care givers and Sufferers alone. “We owe them love and support at all times. You may say you do not have enough but there is something you can give; your smile and encouragement will make life worth living for the warriors.”

Some of the facilities in the new clinic include, Haematospin machines, genotype tanks, electrophoresis machines, Mindray BC 20 analyzer matching, stocks of reagents to last about one years, as well as refurbished laboratories, waiting room and beds.