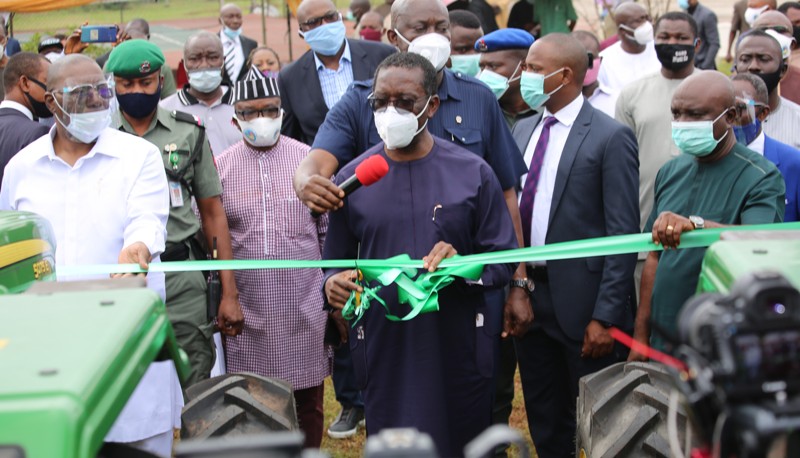 At an optimum work rate, a 75HP direct drive farm tractor can plough 2 hectares of land per day. In swampland for growing swamp rice, this will be difficult to achieve, hence the need for an all wheel direct drive tractor.

For twenty (20) tractors, 40 hectares will be ploughed in a day. In a planting season of two months or 60 days, 20 tractors without break will achieve 2400 hectares.

This will achieve at best, 4800 metric tonnes of table ready rice. Not enough for the extended Warri township for three months. And this is just for rice. Yams, cassava, pepper, tomatoes, bananas and plantains not included.

On the Benin- Owena River Basin Authority land at Illah, more than 10 tractors can be seen working on the 200 hectare farms at the same time.

At Igbodo-Ekwuoma-Umunede axis, more than 30 tractors can be seen working at the same time during the planting season. So many farmers and business people are buying tractors for hire to farmers at high rates.

Farm labour, particularly tractor operators are diminishing so fast as young people migrate to towns and to Asia and Europe. The ones who are left behind charge punishing rates. Now farmhands from Northern Nigeria migrate to farming communities in Delta and all of Southern Nigeria to take the place of those who left.

They take the example of the natives and charge high for labour. They also constitute security risks wherever they go.

In a land full of stumps which most of the farms are, a tractor may not achieve more than a hectare in a day of work or else ploughing blades will be destroyed.

What is the reason for this long recall?

The news that the Delta State Government purchased twenty tractors for onward hire to farmers in the State is the most disgraceful news I’ve received from Delta State in a long time.

There are over a million crop farmers in the state and if you count the livestock farmers, you’ll have nearly two million.

Igbodo in Ika Northeast LGA alone can take much more than the 40 tractors and nothing will be left for other farmers within the LGA.

Before this time, there was not a single working tractor in the Tractor Hireing Unit of the Ministry of Agriculture in the State Government. For many years. None.

And twenty tractors for a million farmers?

Delta State is trapped in the lack of vision and incapacity of it’s leaders. Dr. Emmanuel Uduaghan purchased 96 (ninety-six) tractors for the state farmers just before he left office as Governor.

Until I saw the tractors, I thought that was a good start and that the incoming Government will continue on the progress made. And then I saw the “gbegbeti’s” called tractors at the Commissioners quarters in Asaba.

Tears rolled down my eyes. The tractors were just like paper parts glued together. In the course of Assembly at Commissioners Quarters, many parts broke and fell apart. Shiny, but so bad. In the course of testing the first one assembled, the pump blew apart. The pump is the heart of a tractor without which it cannot lift or work.

Thereafter, farmers were asked to buy the “rigged tractors” “as is where is”.

Farmers, not knowing anything about tractors, made purchases through their co-operatives. But none completed their payments. There was nothing to pay for. The best of them lasted for six months with so much money poured in for repairs and then they all caput.

In 2017/2018 farming season, Anambra State Government bought 200 tractors for use of it’s farmers. Most of them ended up in Omor, the rice growing community in Anambra West. Perhaps the biggest in Southern Nigeria. The tractors are still working and private tractor operators are now rare.

In Bauchi state, the State Government bought 400 tractors in 2016 and has been adding a hundred each every year since then. The same goes for all the states in the Sahel region of Nigeria. These are states of far fewer trees in between vast areas of grassland and with lands pulverised every year.

Tractors are not the only need of Delta farmers. Far from it. In the stores of DAPA (Delta Agricultural Procurement Agency), the only agricultural chemicals you can find are just Paraquat and Glyphosate in their various China formulations.

Paraquat the contact herbicide has been banned in most countries of the world just like DDT. Glyphosate in its original form, “Roundup” has also lost a suit in a US court as a dangerous farm chemical and is to pay heavy fines.

In the news on the purchase of twenty tractors, the state Government engaged in self-praise on its commitment to developing agriculture in Delta state. Gosh! With twenty tractors for a million farmers? I really have been “gushpilating”, according to Wole Soyinka. Somebody needs to prick me to wake up.

*Basil Okoh can be reached at basil.okoh@gmail.com

AUNTY CHRISTIANA, AND YOU GAVE ME A BIG ASSIGNMENT!
International Day of Charity: Dame Okowa Going Beyond Charity To Legacy
Advertisement