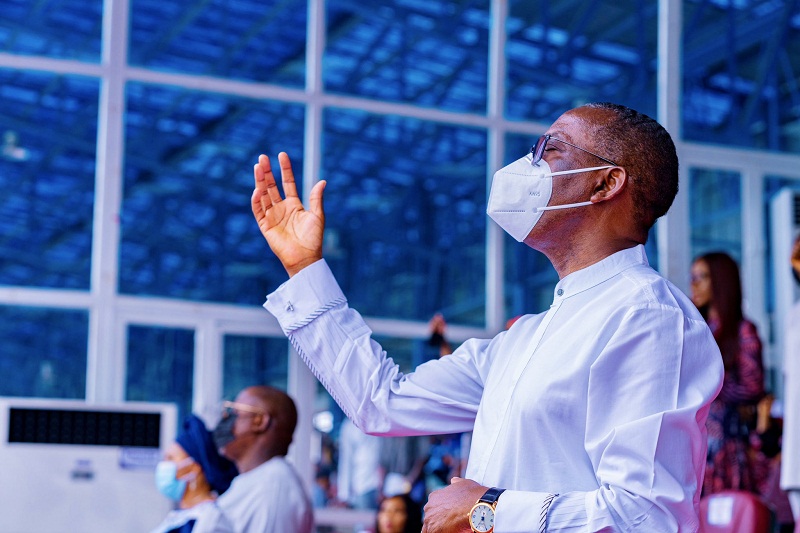 Delta State governor, Senator Ifeanyi Okowa has said praise and worship were the spring boards that had kept the state on top despite the challenges confronting the nation and the World.

Okowa who spoke at the 2021 Delta State Praise and Thanksgiving Day, held on Saturday, May 29, 2021, at Stephen Keshi Stadium, Asaba said a praying state can never be overwhelmed by the enemy.

The event organised as part of activities to celebrate the 6th anniversary of his administration witnessed gospel ministrations from Sinach, Mercy Chinwo, Chioma Jesus, Tim Godfrey, Sony Badu among others.

He thanked Deltans for keeping faith with the celebration which he started in 2015.

“I said in 2015 that instead of anniversary dinner, we will continue to give thanks to God. We have been doing it except for 2020 when we couldn’t gather because of the COVID-19 and we give God the glory.

He thanked Deltans for their support and cooperation in the past six years, saying “I am proud that I am a Deltan and I appreciate you all for all your support.

“I thank you because God has used you all to partner with me to develop Delta, yes a lot of things are getting better but there are security challenges across the nation.

“Because we have praised him, we will never witness them here again. It is my hope that even after my tenure that May 29 every year will continue to remain Delta State Praise and Thanksgiving Day.

He thanked Team Delta for their victory at the National Sports Festival in Edo State assuring that his promise to reward the athletes would be fulfilled soon.

“In the last three editions of the sports festivals we have always come out tops and this year we went to Edo State and we conquered yet again.

“I recalled the day I spoke to them to go to Edo and dominate and they did went and dominated.

“Be rest assured that our promises to you still stands and I know that continuing from today Delta will always win in every sports competition,” he said.

Guest minister at the ceremony, Pastor Paul Enenche of Dunamis International Gospel Centre urged Christians to cultivate the habit of thanksgiving in all their endeavours.

In a message titled “The value of thanksgiving”, Enenche said thanksgiving and gratitude were great virtues on the earth but regretted that there were five categories of people who don’t give God thanks.

“People who rapidly forget the help of God, those who possess an entitlement mentality, those who attribute their results to their abilities, their resources and their connections, those who are absolutely insatiable and those who are outrightly ungrateful. “

“We thank God for forgiving us our iniquities, for healing our diseases, He redeemed our lives from death and destruction, for multiplication and increase and of course for longevity,” Enenche said.