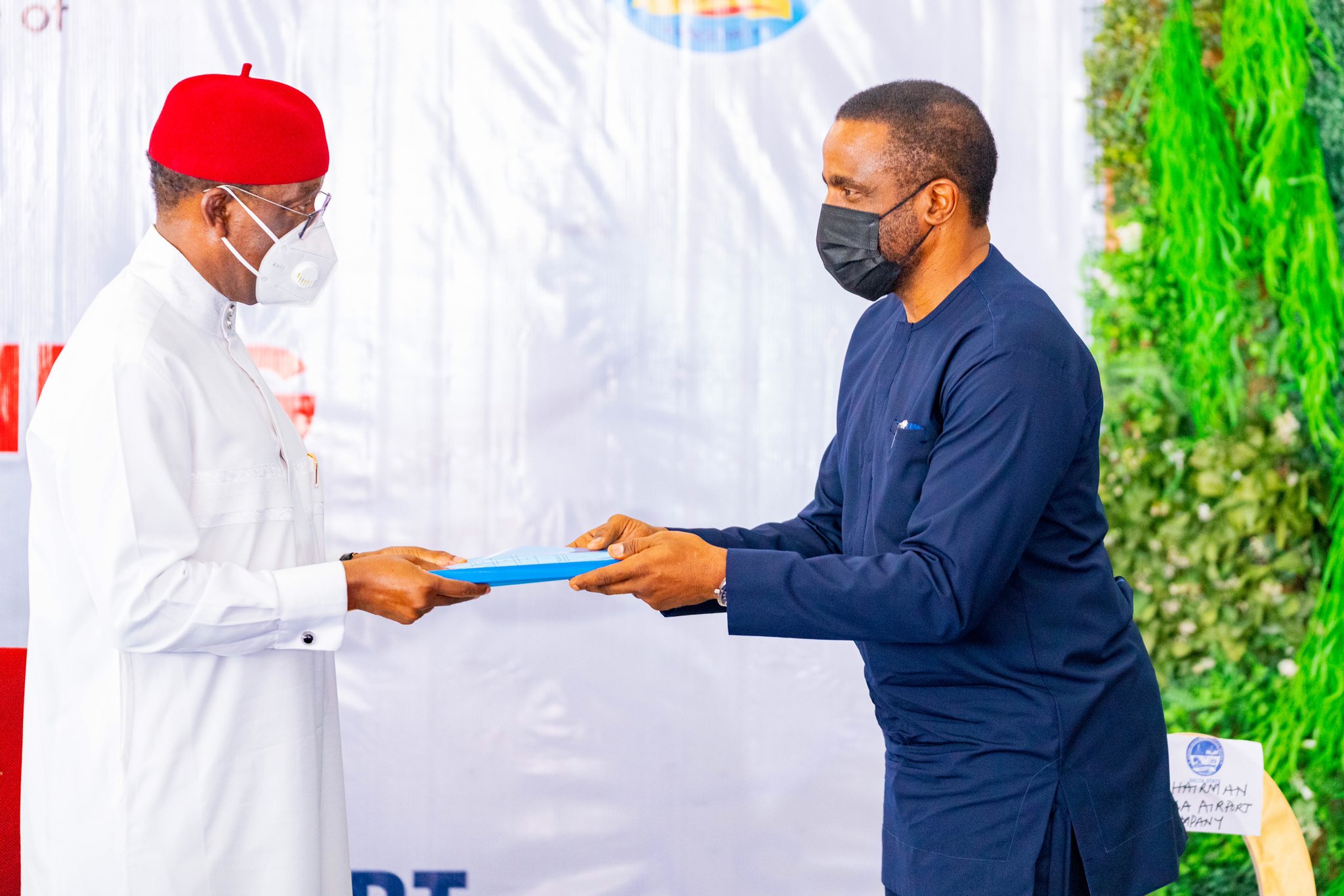 The Delta State government on Tuesday, February 23, 2021 signed a concession agreement with Asaba Airport Company to manage and run the Asaba Airport for the next 30 years.

The agreement is coming after five years of negotiations between the parties involved in the concession.

The negotiation started in 2016 when the current Governor of Delta State, Dr Ifeanyi Okowa, indicated his intention to concession the airport for better management.

They are Air Peace as the Anchor Airline and MRO operator, Multifreight Cargo and Logistics for the cargo and Logistics centre, Arbico Construction Company to build the Business Park, Hotel and Convention Centre, Rainoil Limited and Cybernetic Limited to develop the Tank Farm and provide aviation fuel, and Quorum Aviation Limited to develop the private jet and Helicopter Terminal of the airport.

Speaking about the agreement and how it was arrived at, the Chairman of the Delta State Government Asaba International Airport Concession Committee, Mr Chiedu Ebie, who is also the Secretary to the State Government, said, “The Delta State government is delighted that after an extensive bid process, which spanned a period of five years, with two major consortia emerging in the last round of bidding process, the FIDC-Menzies Consortium was selected as the preferred bidder to operate as the Master Concessionaire”.

“FIDC is an emerging and fast-growing Nigerian building, construction and civil engineering company. Menzies on the other hand is one of the biggest airports operators in the world. It operates in over 200 airports around the world, showing dominance in most major airports in the United Kingdom, United States of America, Europe and South Africa.”

Meanwhile, the Governor of Delta State, Dr Ifeanyi Okowa while delivery his speech at the signing ceremony revealed that the Concessionaire will “pay an annual fees of 100 million naira to the state while the agreement last. They will also pay an  initial sum of 1billion (One Billion naira) to the state government hours after the agreement is signed.”

Governor Okowa who enumerated other benefits of the concession of the airport to the people of Delta State praised the efforts of the Airport Concession Committee for making his vision for the airport a reality.

Part of the agreement as presented by Governor Okowa read that:

“The concession shall be for an initial period of thirty years with the following terms as approved by the Delta State Executive Council and the Delta State House of Assembly.

1. Naming of the Airport: The name of the Airport shall remain Asaba International Airport. However, the Concessionaire, upon discussion with the State, can include tagline to the existing Airport name for the purpose of branding.

2. Competing Airport: There shall not be any publicly or privately-owned new airport, whether greenfield developments or expansions in Delta North Senatorial District of Delta State, during the concession period.

3. Employment of Deltans: The Concessionaire shall at all times be under an obligation to maintain an employment ratio of twenty percent (20%) of its staff for the operation of the Airport comprising indigenes of Delta State;

5. Concessionaire Obligation: The Concessionaire shall be responsible for the management, operation and maintenance of the airport, keeping it in good operating repair and condition throughout the concession period at its own cost and risk, and in accordance with Prudent Industry Practice and the provisions of the Agreement.

6. Exemption of Payment of Tax: The Concessionaire shall be exempted from the payment of some specific taxes to the State for a period of five (5) years, to enable it concentrate on the development of the mandatory capital projects as listed above;

7. Rights of Inspection of the Airport Facilities: The State and its representatives, with a written notice to the Concessionaire, no less than seven (7) days prior to visit, can undertake the inspection of the airport facilities to ascertain compliance with the terms of agreement.

9. Terms of the Concession: The assets and all infrastructure constructed by the Concessionaire, together with all related investments in, and upgrades to the assets, shall be handed back to the State at the end of the concession period.

10. Insurance Policy: The Concessionaire shall purchase and maintain in full force and effect any and all of the insurances required for the operation of the airport.

11. Royalty Fee: The Concessionaire shall pay to the State a royalty fee of 2.5% of the annual Earnings Before Interest, Taxes, Depreciation, and Amortization.

13. Upfront Fee: The Concessionaire shall pay to the State an upfront fee of N1b only on or before close of business on the 15th day following the signing of this agreement.